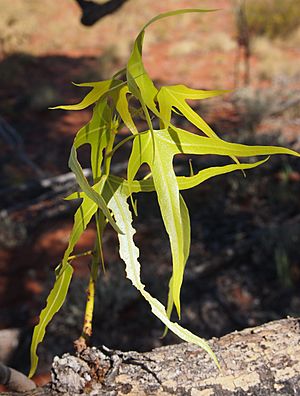 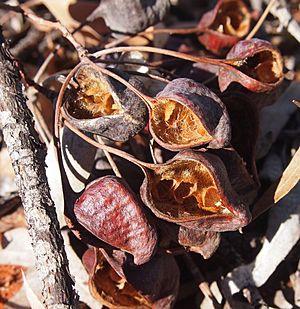 Brachychiton gregorii, commonly known as the desert kurrajong, is a small tree of the genus Brachychiton found in northern and western Australia. It was originally classified in the family Sterculiaceae, which is now within Malvaceae.

The species was first formally described by the botanist Ferdinand von Mueller in 1862 as part of the work Thalamiflorae. The Plants Indigenous to the Colony of Victoria. Several synonyms exist for the plant including; Clompanus gregorii, Brachychiton acerifolius var. gregorii, Sterculia diversifolia var. occidentalis, Sterculia gregorii and Brachychiton populneus var. occidentalis.

The tree typically grows to a height of around 3 to 12 metres (10 to 39 ft) with a canopy width of around 2 to 5 m (7 to 16 ft). The evergreen leaves reach to 20 centimetres (8 in) in length and have three or five lobes in a long stalk. The leaves are shed in the dry months. It flowers between October and December producing inflorescences with bell-shaped pale-yellow flowers with a reddish margin. Following flowering black woody seed pods form that are up to around to 5 cm (2 in) in length and contain many seeds.

It has a scattered distribution in arid areas including the north western corner of South Australia where it is found on rock ridges, slopes and sand dunes. It is also found in the Northern Territory and Western Australia where it is scattered throughout the Goldfields, Pilbara and Mid West regions where it grows in red sandy or loamy soils.

The tree is often associated with the region's granite outcrops. The mistletoe Amyema benthamii is often found as a parasite on the species, introduced by a bird wiping its defecation on a branch, and this is eaten by the caterpillar phase of the moth species Comocrus behri.

The tree is sold commercially in seed form or as a seedling where it is suitable for arid areas. It is drought resistant once established, is moderately frost tolerant, can grow in full sun or part shade in well-drained soils. It forms a large tuber from a young age and can be cultivated as a succulent bonsai. 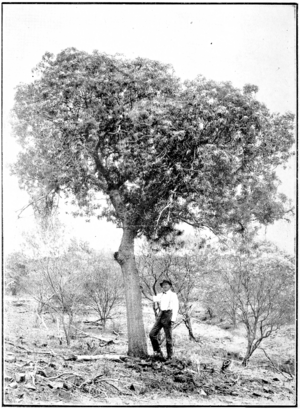 Mature tree in Western Australia, circa 1920

The wood is spongy, making it suitable for use as wood pulp. The low height and much divided branches produce a dense crown that gives good shade. A strong fibre can be obtained from the cambium layer.

All content from Kiddle encyclopedia articles (including the article images and facts) can be freely used under Attribution-ShareAlike license, unless stated otherwise. Cite this article:
Brachychiton gregorii Facts for Kids. Kiddle Encyclopedia.