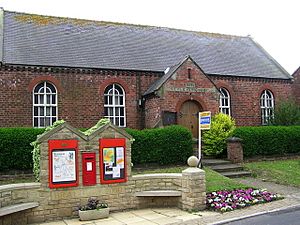 The Wesleyan Chapel in Bradbury, built in 1895 and offered for sale in 2006

Bradbury is a village in County Durham, England. It is situated between Sedgefield and Newton Aycliffe, close to the A1(M) and A689, and is approximately 16 km (9.9 mi) from Middlesbrough. Bradbury is a small agricultural village. The moorland around it is of glacial origin.

It is part of the civil parish of Bradbury and the Isle, along with the hamlets of Great Isle and Little Isle. The parish had a population of 95 according to the 2001 census, increasing to 133 at the 2011 census.

All content from Kiddle encyclopedia articles (including the article images and facts) can be freely used under Attribution-ShareAlike license, unless stated otherwise. Cite this article:
Bradbury, County Durham Facts for Kids. Kiddle Encyclopedia.