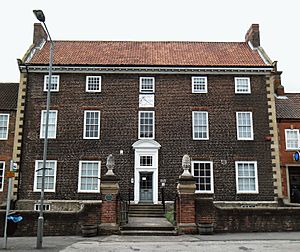 The Manor House in Sedgefield, an example of Queen Anne architecture.

Sedgefield is a market town and civil parish in County Durham, England. It had a population of 5,211 as at the 2011 census. It has the only operating racecourse in County Durham. 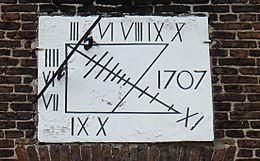 The parish of St Edmund was founded by Bishop Cutheard, around AD 900. The Normans replaced the original wooden church with the present stone building with rounded arches and the present church was built between 1246 and 1256, in Norman times, to replace the original wooden church, with later additions. The tower was added in the 15th century by Robert Rodes. The church contains some fine brasses and 17th century woodwork.

Ceddesfeld Hall was originally the rectory to the church, built after the first rectory burnt down; it is now occupied by the Sedgefield Community Association. A Latin inscription above the door states, "By the generosity of Samuel and Shute Barrington, one an Admiral of the Fleet, the other Bishop of Durham, whose achievements are praised by everyone." The hall was rebuilt in 1793, by the Barringtons, for their nephew, the rector. The grounds, now a public area, were laid out in the mid-18th century to a design by Joseph Spence.

The Manor House occupies a prominent position at the head of the green. With three storeys it is a fine example of Queen Anne style architecture. Built in 1707, as the sundial on the house proclaims, the house was part of the Hardwick Estate, until 1923. The house has been carefully restored and is currently used as a venue for weddings and events as well as being a business hub.

The Parish Hall was founded in 1849 as the Institute of Literature and Science, but later rebuilt as a Mechanics Institute. The hall was extensively refurbished in 2008, and continues to host a wide range of social events and entertainment.

The 700th anniversary of the granting of Sedgefield's market charter took place in 2012. The market was held on Cross Hill from 1312 until 1918. The original market cross was removed during the 19th century, but was replaced in 2012 with a modern version, produced by a local designer. A farmers' market is held on the village green on the second Sunday of every month.

A Shrove Tuesday Ball Game still takes place in Sedgefield and is an example of Mob Football. A recent statue was erected to commemorate the yearly event; it features a man catching the famous Shrove Tuesday ball.

Another popular annual event is the Mediaeval Fair, which takes place in mid-May, and brings the local community and surrounding areas into the closed central streets of Sedgefield, to participate in fun fair rides, and medieval-themed activities.

Sedgefield is home to a Grade II Listed historic coaching inn, which is presently the Hardwick Arms Hotel.

For more details, see List of schools in Durham

There are a number of sporting venues and organisations in Sedgefield, the most famous of which is probably Sedgefield Racecourse, a regional thoroughbred horse-racing venue. There have been horse races since as early as 1732, and in 1846 officially recognised meetings began.

Sedgefield Cricket Club is situated on the outskirts of the town on Station Road. The ground was donated to the people of Sedgefield around the turn of the nineteenth century and is home to a number of senior and junior teams.

Reformed in 2007, Sedgefield District RUFC are a small club, based at the cricket club, and with their own pitch on grounds overlooking Hardwick East. It is associated with Durham County Rugby Football Union, it was awarded the Whistler Trophy by the Durham County referee society for the most welcoming club for officials and opponents alike.

The first XV currently play in Durham/Northumberland 2 following several successful seasons in Durham/Northumberland Division 3. Notable achievements for the club are winning promotion to DN2 in the 2016/17 season and won the county plate in the 2017/18 Season. The team has had some notable successes and a tough reputation for taking scalps from many larger, more ‘established’ clubs in the area, Gosforth, Darlington and Redcar to name a few.

The club's second XV “Sedgefield Saxons” play in the Tees Valley Friendly League, this team has an inclusive, and hard working reputation, with the aim of continuing to develop both playing, and the values of Rugby Union in the area. Reflecting this aim the club fielded a third XV, quaintly known as the "T'urds", together with a Veteran team, Sedgefield Spartans in the 2019/20 season.

At the end of the 1970s a group of friends started gathering to ride their motocross bikes at a farm in Low Hardwick. Today Quad Sport Leisure is one of very few sites in the North East of England where people can legally ride their quad bikes off-road. Occasionally, motocross tracks are available to the public for recreational use, and quads are available for hire suitable for all age groups from infants upwards. A "Bring your own" quad track, designed by a professional quad racer to include two large jumps, is also available.

Sedgefield Squash Club has two courts behind Ceddesfield Hall in the village. The club has 3 Men's and 2 Ladies teams in the Durham and Cleveland Leagues. Sedgefield Youth Football Club (SYFC) run an Under-12 team in the Teesside junior football alliance. They are based at the local community college. Sedgefield Tennis Club play on three courts at the Community College. The club enters one Ladies team, one Mixed Team, and two Men's teams in the Cleveland Tennis League. Sedgefield ST Edmunds F.C play in the Swinburn Maddison Premier League.

Knotty Hill Golf Centre is a 45-hole golf course, opened in the mid-nineties. The Princes and the Bishops courses are both 18 holes and another nine holes is made up by the Academy course.

Sedgefield Harriers are a local running and athletics club based at Sedgefield Community College. They compete in road races, in fell races (mainly on the North York Moors), in cross country and on the track. There is a large junior section which competes in track and field competitions and cross country. The club hosts the Serpentine Trail Race each September, Summer and Winter open handicaps in January and July and the Neptune Relays in April.

Mark Gatiss - (born 17 October 1966) Actor and writer for the BBC show Doctor Who and co-creator (with Steven Moffat) of the popular BBC series Sherlock, in which he also acted, was born in Sedgefield and lived opposite to Winterton hospital where his parents worked.

Peter Willey – (born 6 December 1949) Peter Willey is a former English cricketer and Umpire, who played as a right-handed batsman and right-arm off break bowler.

All content from Kiddle encyclopedia articles (including the article images and facts) can be freely used under Attribution-ShareAlike license, unless stated otherwise. Cite this article:
Sedgefield Facts for Kids. Kiddle Encyclopedia.