The suburb is one of the oldest suburbs in Canberra, a relatively young city, settled in 1922 and gazetted as a division name in September 1928. It contained Canberra's first light-industrial area. In recent years this area has begun to be redeveloped as an entertainment and residential precinct. Other areas have been redeveloped with flats. It is now Canberra's most densely populated suburb. 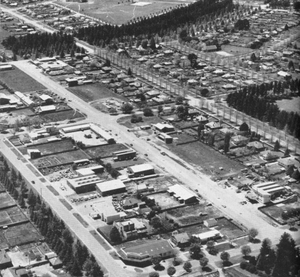 The construction of the Braddon Garden City heritage precinct the area bounded by Donaldson, Elimatta, Batman and Currong streets began in 1921 and 1922. This was the only completed example of a design for a residential area in Canberra by Walter Burley Griffin. The suburb was gazetted as a division name in September 1928. Braddon is named after Sir Edward Braddon, a Federalist, legislator and a participant in the writing of the Australian Constitution. Streets in Braddon were named for Aboriginal words, legislators and pioneers. The first light-industrial area in Canberra was established in Braddon in the 1920s and subsequently became the centre of automotive trades, before these businesses were established in the service areas of Phillip, Belconnen and Tuggeranong and in Fyshwick and Mitchell. In recent years the light-industrial area has begun to be redeveloped as an entertainment and residential precinct. Most of the residential areas of the suburb have been redeveloped with flats. 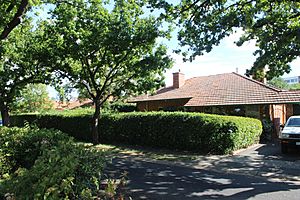 The following areas are heritage listed: 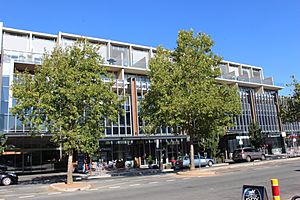 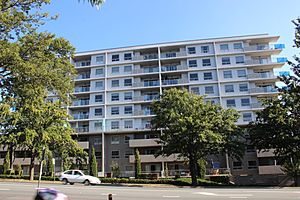 Modern flats in Wakefield Avenue on the northern edge of Braddon

Braddon contains a commercial area centred on Mort and Lonsdale streets, which run parallel to Northbourne Avenue. The area includes several small art galleries, car rental agencies, a few mid-market restaurants, cafes and bars, trendy gift and clothes shops, as well as liquor stores and a Centrelink office. It formerly contained many car dealerships and businesses providing automotive services, but some of these are being redeveloped with six-storey apartment buildings with commercial uses on the ground floor. There are also a number of popular pubs, including Civic Pub, and low-rise office blocks in the suburb.

Away from the commercial areas, much of the previously suburban housing in Braddon has been replaced with apartment buildings that are popular due to their relatively close proximity to the City. Fenner Hall, a residence of the Australian National University, is located along Northbourne Avenue. The suburb is socially mixed with its population including many younger professionals and students, along with some recipients of public housing assistance. Some traditional single-family homes do remain where the suburb borders Ainslie and Dickson.

Most of the single houses north of Haig Park and in Section 22 (surrounded by Torrens, Girrahween, Fawkner and Elouera streets) have been replaced by two or three storey flats in recent years as a result of being zoned in the Inner North Precinct. Land adjoining Northbourne Avenue is now zoned to permit redevelopment with 25 metres (about 8 storeys) high flats or 32 metres (about 11 storeys) at the corners of Wakefield Avenue with Northbourne Avenue. The area south of Haig Park between Mort and Torrens streets in zoned to allow mixed use developments, generally 22 metres high (6 or 7 storeys), but 16 metres high (5 storeys) facing Torrens street and up to 30 metres high (about 10 storeys) facing Cooyong street.

The area between Ainslie Avenue, Cooyong, Donaldson and Currong street, currently occupied by four and eight-storey government flats (Allawah Court and Currong Apartments) and Catholic church land, is currently proposed for redevelopment with mixed-use buildings, with a range of building heights between 5 and 12 storeys. Originally two buildings at the corners of Ainslie Avenue were proposed to be 15 storeys high. The eastern parts of the suburb continue to be zoned for low-rise suburban housing except the sections adjacent to Ainslie Avenue, which are zoned for three-storey flats, except for Gorman House—which is heritage listed—and the Hotel Ainslie (Mercure Canberra) site—which is also heritage listed and zoned for a two-storey hotel. 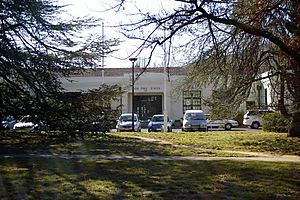 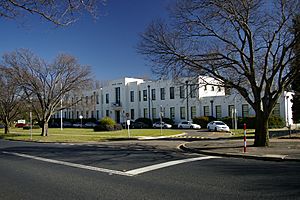 Ainslie School is one of Canberra's oldest schools. It was opened in 1927 as the first official act of the Prime Minister Stanley Bruce following his arrival in Canberra. It is described by the ACT Heritage Commission as having "a high degree of integrity with intact street and site planting and relatively intact built elements and original internal fittings in the Art Deco style." It is also believed to be "the first in Australia to be planned with a library, a lecture room and a needlework room". The original building was completed in 1927 and, with the opening of a larger building for the primary in 1938, it became the infants school. From 1980, the building was occupied by Questacon (until 1988) and the School Without Walls (until 1997). In recent years it has been occupied by the Ainslie Arts Centre. 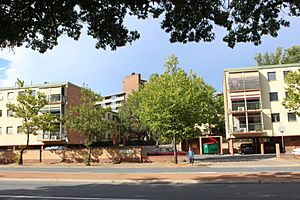 The three-storey Allawah Court flats (containing 114 two-bedroom flats) were completed east of Cooyong street and north of Ainslie Avenue in 1956, the three-storey Bega Court was completed south of Ainslie Avenue in Reid in 1957 and the eight-storey Currong Apartments (184 one-bedroom flats and 28 of two bedrooms) were completed east of Allawah Court and west of Currong Street in 1959 in order to cope with a critical lack of accommodation for public servants transferred to Canberra. The ACT Heritage Council described them as having been designed in the Post-War International style "similar to post-war housing in Europe, particularly in English new towns. The fine proportions, crisp detailing and low scale of [the Allawah and Bega Courts] and their siting continuing the street pattern made them more architecturally successful than the three eight-storey blocks of flats along Currong Street which completed the development." The Heritage Council declined to heritage list the buildings and despite some local opposition it is proposed that they be demolished and replaced by more modern and denser accommodation along with some commercial uses.

The area bounded by Donaldson, Elimatta, Batman and Currong streets, including the street furniture, are heritage listed as "an early 20th century 'Garden City' planned subdivision" and as an example of early Federal Capital planning philosophy and architecture among other things. This area was originally named the "Ainslie Cottages Project" and the first houses were constructed between 1921 and 1922 to meet the urgent need for housing for lower grade public servants and workmen to build the civic centre and other parts of the city. It is the first expression of the Garden City concept in Canberra and it is the only completed example of a design for a residential area in Canberra by Walter Burley Griffin. 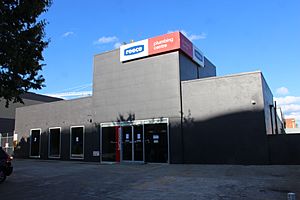 According to the ACT Heritage Council, the former Coggan’s Bakery, 36 Mort Street, Braddon, "has a special association with the cultural phase of early planning and development of the nation’s capital in the 1920s." It formed part of the Federal Capital Commission's early planning and was established with the designation of the Braddon area as a light-industrial zone. The Heritage Council said that Coggan’s Bakery "remains as the most historically distinctive structure in the Braddon industrial area." 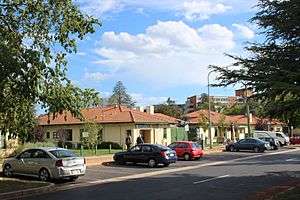 The Gorman House Arts Centre is a significant heritage complex that has been adapted for arts use. It is occupied by some of the ACT's key arts organisations, smaller arts groups and individual artists.

Haig Park lies on either side of Northbourne Avenue in Braddon and Turner and comprises fourteen rows of trees planted to form a windbreak and shelterbelt. It is listed on the ACT Heritage register.

The Hotel Ainslie (currently operating as the Mercure Canberra) was built in the English Arts and Craft style as a government hostel to accommodate the transfer of public servants in 1926 and 1927. Since 1928 it has operated as a hotel (at times called the Ainslie Rex and Olims Canberra Hotel) and has been extended significantly to the southwest. The exterior of the original structure, the garden in front of the hotel, including the Atlas cedars, Mediterranean cypresses and the Atlas cedars along Batman Street and the landscaped central courtyard are heritage listed. 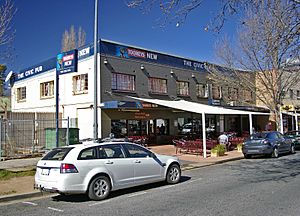 The Civic Pub, a bar on Lonsdale Street, Braddon

Historically an industrial area comprising car yards and factories, Lonsdale Street has in recent decades transformed into a cosmpolitan hub and the commercial centre of Braddon. Lonsdale Street is home to shops selling items by original Canberra designers, stylish Australian fashions, imported designer shoes and handcrafted gifts and homewares. There is also a mix of restaurants, bakeries, bike shops, food vans, camping stores, car yards and hairdressing salons. The Lonsdale Street Traders is a temporary commercial destination in a converted tyre-warehouse, and a boutique hotel is planned for the northern end of the street, opening in 2015.

During the Summernats car festival, Lonsdale Street is the site of an annual unofficial street parade, the Lonsdale Street Cruise. The parade features all types of cars and draws crowds of spectators.

The Northbourne Flats are located on both sides of Northbourne Avenue in Braddon and Turner. The flats provided the first high-density housing project on Northbourne Avenue, now characterised by high-density living. In 2011, the ACT Government ran a national design competition to remodel the flats, to make way for the new development current public housing tenants will be relocated to other properties. 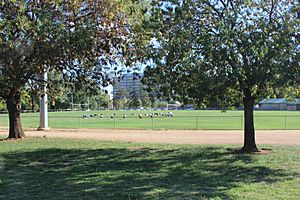 Northbourne Oval was established in 1925, making it North Canberra's oldest enclosed oval. It is listed by the ACT Heritage Council.

On Census night 2011, Braddon had a population of 4,558 people, up significantly from a population of 3,574 in 2006. On 30 June 2013, it had an estimated population of 5,388 and a density of 3,851 per square km, making it the densest suburb in Canberra. The 2011 census shows Braddon residents have a median age of 28, which is very young compared to an ACT median of 34 and an Australian median of 37. The median weekly household income was $1679, $241 less than the ACT median but more than the median Australian household income of $1234. 41.5% of the population were professionals, compared to the Australian average of 21.3%. 28.8% worked in government administration, compared to the Australian average of 1.3%, although the Canberra-wide average is a similar 20.1%.

After demographic analysis, Braddon was named one of the hippest places to live in Australia on the 'Urbis Hip List' in 2012.

Braddon’s vegetation is predominantly exotic, belonging to the cedar, ash, oak and pine varieties, although there are a significant number of eucalypts which are planted mainly around the perimeter of the suburb (Northbourne Avenue, Limestone Avenue, Ainslie Avenue) and within Haig Park. Most of the neighbourhood’s streets are lined with avenues of mature exotic trees. Torrens Street, planted with oak (Quercus palustris), is a particularly fine example of a ‘garden city’ streetscape. Haig Park has mixed plantings including cedar, eucalypt, pine, cypress, ash and oak (Cedrus deodara, Eucalyptus cinerea, Pinus radiata, Cupressus sempervirens, Fraxinus velutina and Quercus palustris respectively).

Poisonous mushrooms are known to grow in Braddon, including death caps which are commonly found near established oak trees.

The streets in Braddon are named after Aboriginal words, legislators and pioneers.

Calcareous shales from the Canberra Formation are overlain by Quaternary alluvium. This rock is the limestone of the original title of Canberra "Limestone Plains".

All content from Kiddle encyclopedia articles (including the article images and facts) can be freely used under Attribution-ShareAlike license, unless stated otherwise. Cite this article:
Braddon, Australian Capital Territory Facts for Kids. Kiddle Encyclopedia.