Branchville was incorporated as a borough by an act of the New Jersey Legislature on March 9, 1898, from portions of Frankford Township. An additional portion of Frankford Township was annexed as of March 1, 1951. The borough was named for its site at a branch of the Paulins Kill. 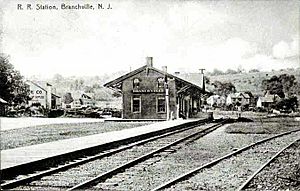 Branchville Station of the Sussex Railroad in 1917

Branchville was established by settlers from Connecticut in the 18th century. It grew quickly and in the 1820s the town was divided into building lots. By the year 1844, it was a well-established community with 32 dwellings, mills, blacksmiths, an academy, a church and a variety of other factories and businesses.

The addition of two water-powered mills and a dam in 1855 furthered the town's prosperity. Energy would later be harnessed from this dam and a second one that was built to supply Branchville with electricity and its own power company.

Extension of rail service to Branchville in 1869 brought an even greater boon to the village's economic market growth. From 1869-1871 forty new homes were built. The railroad had made it possible to ship products from the local mills and creameries to larger urban areas to the east. With lake communities nearby the tourism was also spurred by the railroad. Up to six trains a day would bring people from the larger cities to enjoy a country vacation.

Branchville is an independent municipality completely surrounded by Frankford Township, making it part of 21 pairs of "doughnut towns" in the state, where one municipality entirely surrounds another.

This climatic region is typified by large seasonal temperature differences, with warm to hot (and often humid) summers and cold (sometimes severely cold) winters. According to the Köppen Climate Classification system, Branchville has a humid continental climate, abbreviated "Dfb" on climate maps.

Branchville is on the Ordovician Martinsburg Formation. This is a shale, slate, and limestone formation created 450 million years ago when a chain of volcanic islands collided with proto North America. The islands went over the North American Plate, creating the Highlands of Sussex County and the Kittatinny Valley. Millions of years of erosion occurred and there was a second event. About 400 million years ago a small continent that was long and thin, collided with proto North America creating folding and faulting. The Silurian Shawangunk conglomerate that was under a shallow sea, lifted due to pressure. The pressure created heat which melted the silica and bonded the quartz and conglomerate together, creating Kittatinny Mountain.

The Wisconsin Glacier covered all of Branchville from 21,000 BC to 13,000 BC, covering the top of Kittatinny Mountain. End moraines exist in Stokes State Forest, another just off Route 565 north of the Skylands Park and one about a mile south of Ross's Corner. An esker was created when the glacier retreated due to climate warming. Many ponds and lakes created. Culver Lake was created at this time, as the drainage became blocked. Branchville is drained by Culver's Lake Creek and Dry brook. Dry Creek starts at the Branchville Reservoir, travels south, enters into Culver's Creek in Branchville and eventually empties into the Paulinskill. There is a chain of hills between Dry Creek and Papakatin Creek. These hills are what separate the Paulinskill River drainage system from that of the Wallkill. The drainage divide is just north of Route 206 and the goes northwest toward Branchville Reservoir. Water near Route 206 or south of Route 206 drains into the Paulinskill. Water north of Route 206 drains into the Wallkill River.

There were 364 households out of which 28.8% had children under the age of 18 living with them, 46.2% were married couples living together, 10.7% had a female householder with no husband present, and 39.3% were non-families. 34.1% of all households were made up of individuals, and 17.0% had someone living alone who was 65 years of age or older. The average household size was 2.30 and the average family size was 2.98.

There were 354 households, out of which 28.8% had children under the age of 18 living with them, 52.5% were married couples living together, 9.6% had a female householder with no husband present, and 36.4% were non-families. 32.2% of all households were made up of individuals, and 18.1% had someone living alone who was 65 years of age or older. The average household size was 2.37 and the average family size was 3.03.

Students in public school for pre-kindergarten through eighth grade attend the Frankford Township School District, located in Branchville, as part of a sending/receiving relationship. As of the 2017–18 school year, the district, comprised of one school, had an enrollment of 520 students and 58.3 classroom teachers (on an FTE basis), for a student–teacher ratio of 8.9:1.

For ninth through twelfth grades, public school students from Branchville attend High Point Regional High School. Also attending the school are students from Frankford Township, Lafayette Township, Montague Township, Sussex Borough and Wantage Township (where the school is located). As of the 2017–18 school year, the high school had an enrollment of 917 students and 84.3 classroom teachers (on an FTE basis), for a student–teacher ratio of 10.9:1.

People who were born in, residents of, or otherwise closely associated with Branchville include:

All content from Kiddle encyclopedia articles (including the article images and facts) can be freely used under Attribution-ShareAlike license, unless stated otherwise. Cite this article:
Branchville, New Jersey Facts for Kids. Kiddle Encyclopedia.