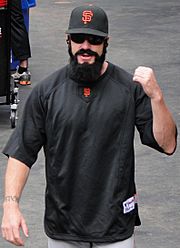 Brian Wilson in 2011, after he started growing a beard

Brian Patrick Wilson (born March 16, 1982) is an American baseball player. He was born in Winchester, Massachusetts and grew up in Londonderry, New Hampshire. He played college baseball at Louisiana State University. He was drafted by the San Francisco Giants in 2003 and has played his whole career in the Giants system. He started playing with the Giants in 2006 and became their closer (a pitcher who pitches the ninth inning of the game) in 2008. He has been named an All-Star three times in 2008, 2010 and 2011. In the 2010 season, he starting growing a beard, which he kept after the Giants won the World Series. He led the league in saves in 2010. In 2011, he started slowly, but had 25 saves and six wins before the All-Star break. Due to his beard and his personality, Wilson appeared on many talk shows and commercials, including for MLB 2K11.

All content from Kiddle encyclopedia articles (including the article images and facts) can be freely used under Attribution-ShareAlike license, unless stated otherwise. Cite this article:
Brian Wilson (baseball) Facts for Kids. Kiddle Encyclopedia.