Brighton is a small seaside town within the city limits of Dunedin on New Zealand's South Island. It is located 20 kilometres southwest from the city centre on the Southern Scenic Route. The town faces a small bay which includes a broad sheltered beach. Other beaches extend from here. They make the area popular for summer day trips from Dunedin. 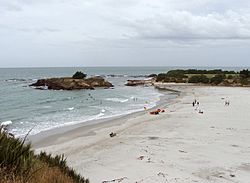 Brighton Beach, immediately to the southeast of the town

The town was named by an early resident, Hugh Williams, after Brighton in England.

Brighton is connected by coastal road with the Dunedin commuter settlement of Waldronville to the northeast (and from there to Dunedin itself) and with Taieri Mouth to the southwest. The settlement of Ocean View lies immediately to the east of Brighton, separated from it by a large bluff (simply known as "Big Rock") which juts towards the ocean to the northeast of Brighton Beach. The coast road winds around this headland on its entry to Brighton from Dunedin. At the southern end of the beach is the mouth of the Otokia Creek, a small stream which has its sources 10 kilometres (6.2 mi) to the southwest in the coastal hills which separate the coast from the Taieri Plains.

The proportion of people born overseas was 15.9%, compared with 27.1% nationally.

Big Rock Primary School is a full primary school serving years 1 to 8 with a roll of 72 students as of July 2016. The school was created when Brighton and Ocean View schools merged in 2008.

All content from Kiddle encyclopedia articles (including the article images and facts) can be freely used under Attribution-ShareAlike license, unless stated otherwise. Cite this article:
Brighton, New Zealand Facts for Kids. Kiddle Encyclopedia.