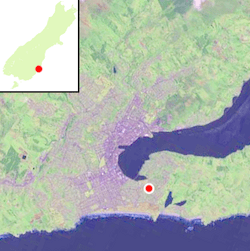 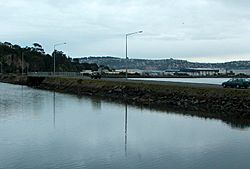 Causeway across the mouth of the Andersons Bay Inlet 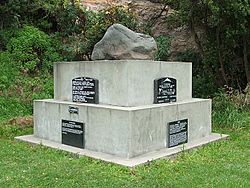 Rongo (memorial stone) to Taranaki Māori transported to Dunedin during the Land Wars.

The suburb of Andersons Bay extends south from the Andersons Bay Inlet, an indentation in the southern shore of the Otago Harbour, and across the isthmus joining the Otago Peninsula to the mainland. In 2001 Andersons Bay had a population of 2,532.

The suburb's name is also occasionally used for the area extending north along the Southern Endowment, an area of land reclaimed from the harbour which sits close to its western shore - towards the suburb of South Dunedin. This area, which was reclaimed during the mid-twentieth century, was the location of the bay for which the suburb is named. The Southern Endowment, largely used for light industrial purposes, also includes a sports complex, the Edgar Centre.

South of the Anderson's Bay Inlet the suburb comprises residential housing. It is bounded by Musselburgh in the west and southwest, Shiel Hill in the east, and the coastal suburbs of Tahuna and Tainui in the south. These two smaller suburbs, which lie close to the Pacific Ocean, are often considered part of either Andersons Bay or Musselburgh. The rocky outcrops of the Musselburgh Rise stand immediately to the west and south of the Andersons Bay Inlet.

Close to the northern edge of the Andersons Bay Inlet a large memorial stone commemorates the Taranaki Māori prisoners of the New Zealand Land Wars who were transported south to Dunedin, many of whom constructed the causeway across the head of the inlet and much of Dunedin's foreshore roads as forced labour. A branch railway ran along Portobello Road in this area from the 1870s until 1912.

One of Dunedin's secondary schools, Bayfield High School stands on reclaimed land at the southern end of the inlet. This school lies close to the boundary of the suburbs of Andersons Bay and Musselburgh.

Andersons Bay's main roads include Portobello Road and Portsmouth Drive (in the industrial area north of the inlet, and Musselburgh Rise, Silverton Street, and Somerville Street (in the residential area to the south). Shore Street and Marne Street skirt the western and eastern shores of the inlet; Marne Street links with Larnach Road, which runs steeply up to the suburbs of Waverley and Vauxhall.

The Māori name for the area was Puketai or Puketahi, probably meaning "single or isolated hill". It is likely that a pa of this name was sited somewhere in the vicinity, possibly on the rise overlooking Tomahawk Lagoon in what is now the suburb's southeast, or on some section of the Musselburgh Rise. Such a site would have commanded a strategic position prior to the reclamation of land from the harbour and from swamp, as it would have controlled almost all land passage to the Otago Peninsula.

Andersons Bay was named after early settler James Anderson and his son and daughter-in-law John and Isabella, who were the first European settlers in the district in 1844 - four years before the founding of Dunedin. James's grandson John was the first European child born in the area, in 1846. Their home was close to what is now the corner of Somerville and Silverton Streets, a corner known for many years by the now almost-forgotten name of Ross's Corner.

Andersons Bay Inlet, once known as Andersons Cove, is what remains of a far larger expanse of water which included the long-reclaimed Tainui Inlet. Much of this was reclaimed in the 1950s to provide grounds for Bayfield High School. In the late 19th century both a railway and ferry service connected this area with central Dunedin, but neither has survived. The ferry operated only during the 1890s, and the railway operated from 1877 until the early years of the twentieth century. The original intention was for a rail line to run along the shore of the peninsula to Portobello, but Andersons Bay was the furthest the line ever reached.

Andersons Bay had its own council briefly, the Bay Town Board. This administered the area from 1905 until its amalgamation with Dunedin City in 1912.

Andersons Bay hit the news headlines in 1995 after one of New Zealand's most notorious crimes was committed in Every Street, close to the boundary of Andersons Bay and Shiel Hill. The case, in which five of the six members of the Bain family were slain, led to one of New Zealand's most prominent causes celebres after the remaining member of the family, David Bain, was arrested for the murders. David Bain was found guilty and served 13 years of a life sentence before succeeding in having the case reopened. His retrial, in 2009, resulted in a verdict of "not guilty". 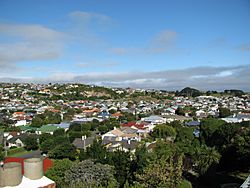 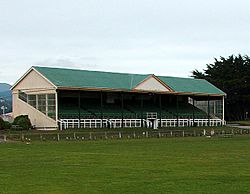 The grandstand at Tahuna Park

Tahuna and Tainui are two small, somewhat vaguely defined suburbs which lie to the south of Andersons Bay and Musselburgh, close to Dunedin's southern coastline (Ocean Beach). Both are often considered parts of either Musselburgh or Andersons Bay.

Tainui lies to the north, in the area of residential housing which lies in the southeastern corner of "The Flat" (southern Dunedin's wide coastal plain) between Victoria and Tahuna Roads in the south and Musselburgh Rise in the north. Its eastern boundary is the start of a section of the Musselburgh Rise skirted by Tainui Road. Notable features of Tainui include Culling Park, a sports ground which is the home of Dunedin Technical football club.

To the south of Tainui is Tahuna. This suburb stretches along Victoria and Tahuna Roads, and is largely dominated by several areas of open space which lie to the south between these roads and the ocean. These open spaces include two notable sports venues: Chisholm Park Golf Course and Tahuna Park.

Chisholm Park is a championship-standard links course featuring one of New Zealand's finest holes, Lawyer's Head. This hole dog-legs around craggy cliffs with the ocean pounding at their feet, and as such is both visually impressive and technically difficult. The course was founded in 1937 and extended from nine to 18 holes in 1941.

Tahuna Park houses Dunedin's A&P showgrounds, and was the city's first rugby union and rugby league test venue. The grounds were inaugurated in a 20-acre (8.1 ha) here in 1883, and the park's only union test match was played in 1905, with the All Blacks beating Australia 14-3. The park hosted the 1924 Great Britain side when they defeated the New Zealand rugby league side 31-18 in front of 16,000 fans.

The third notable open space close to the coast is the Andersons Bay Cemetery, Dunedin's biggest cemetery. This is located at the southeastern end of Tahuna, and is bounded to the west and south by Chisholm Park Golf Links. The cemetery occupies a prominent rise that juts into the sea as Lawyer's Head. The cemetery was opened in 1867, but is now largely full. A crematorium, inaugurated in 1962, occupies a prominent spot close to the cliffs.

Beyond the cemetery, Tahuna Road reaches a Y-junction with Tomahawk Road, which descends to the southeast to follow the coast to the suburb of Ocean Grove and rises to the north to meet with Silverton Road, Andersons Bay at that suburb's boundary with Shiel Hill. This area of Tahuna was formerly known as Ocean View, a name which is still occasionally encountered, though this name has fallen out of use due to confusion with the settlement of the same name which lies 15 kilometres (9.3 mi) to the southwest near Brighton.

All content from Kiddle encyclopedia articles (including the article images and facts) can be freely used under Attribution-ShareAlike license, unless stated otherwise. Cite this article:
Andersons Bay Facts for Kids. Kiddle Encyclopedia.