Brookhaven (pronounced locally: broo-KAY-vən) is a small city in Lincoln County, Mississippi, southwest from the state capital of Jackson. The population was 12,520 at the 2010 U.S. Census. It is the county seat of Lincoln County. It was named after the Town of Brookhaven, New York, by founder Samuel Jayne in 1818. 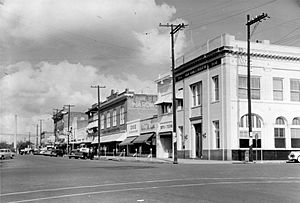 Brookhaven is located in what was formerly Choctaw Indian territory. The city was founded in 1818 by Samuel Jayne from New York, who named it after the Town of Brookhaven on Long Island.

The railroad came though Brookhaven in 1858. It connected Brookhaven with New Orleans to the south and Memphis to the north.

During the Civil War, Brookhaven was briefly occupied at noon on 29 April 1863 by a raiding party of Union cavalry under the command of Colonel Benjamin Grierson. The Union force burned public buildings and destroyed the railroad. This was rebuilt after the war.

In 1936 Brookhaven was chosen to be the site of the Stahl-Urban garment plant.

In 1955, Lamar Smith, a U.S. civil rights figure, black farmer, World War I veteran and an organizer of black voter registration, was shot to death mid-day on the lawn of the county courthouse in Brookhaven.

The size of the City of Brookhaven was expanded in late 2007 to almost triple its previous area, through a vote of annexation, to bring in suburban developments surrounding the older town and equalize taxing and services provided to the new metropolitan area.

There were 3,810 households out of which 31.1% had children under the age of 18 living with them, 39.9% were married couples living together, 21.7% had a female householder with no husband present, and 34.9% were non-families. 31.9% of all households were made up of individuals and 16.0% had someone living alone who was 65 years of age or older. The average household size was 2.44 and the average family size was 3.10.

Temple B'nai Shalom, a temple/synagogue of Judaism is a rare example of Moorish Revival architecture and is listed on the National Register of Historic Places maintained by the National Park Service of the U.S. Department of the Interior.

All content from Kiddle encyclopedia articles (including the article images and facts) can be freely used under Attribution-ShareAlike license, unless stated otherwise. Cite this article:
Brookhaven, Mississippi Facts for Kids. Kiddle Encyclopedia.