Brooklandville is an unincorporated community in Baltimore County, Maryland, United States near the intersection of Jones Falls Expressway and the Baltimore Beltway. The general area is a part of Lutherville, and some addresses in the area are considered to be in Lutherville, though Brooklandville has a postal zone and post office of its own (zip code 21022). Some notable landmarks in the area, including the Park School of Baltimore and St. Paul's Schools are technically within Brooklandville, as noted by their mailing addresses. However, addresses within the main office complex in the area, Green Spring Station, are considered to be within Lutherville.

The Green Spring Station complex is located at the intersection of Falls and Joppa Roads, near the interchange of I-695 and the Jones Falls Expressway, and is also bordered by Greenspring Valley Road, though the segment of this road that runs through the complex is identified as Station Drive. Seminary Avenue also begins very close to the location. The complex has offices for several large companies, as well as some upscale shops, restaurants, banks, and the largest indoor tennis facility in the Mid-Atlantic. The most notable company with offices at Green Spring Station is Johns Hopkins Hospital, which has a satellite branch that takes up a large portion of the grounds, and has been operating at this location since 1994.

The Green Spring Station complex on weekdays is served by the Maryland Transit Administration's Bus Route 60 every 40–60 minutes. This bus links to the Mt. Washington Light Rail Stop and the Reisterstown Plaza Metro Subway Station.

Free service to Green Spring Station from the Johns Hopkins Medical Campus is available on the hospital's Green Spring Shuttle hourly on weekdays. 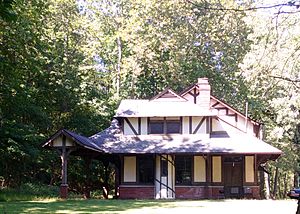 From 1830 until 1955, Brooklandville was served by the Green Spring Valley Branch of the old Northern Central Railway (later part of the Pennsylvania Railroad). The former station still stands, now a private residence.

Maryvale Preparatory is an independent Catholic girls' school. It was used as a filming location for the 1997 Clint Eastwood movie Absolute Power, as the Washington DC mansion of Walter Sullivan.

All content from Kiddle encyclopedia articles (including the article images and facts) can be freely used under Attribution-ShareAlike license, unless stated otherwise. Cite this article:
Brooklandville, Maryland Facts for Kids. Kiddle Encyclopedia.