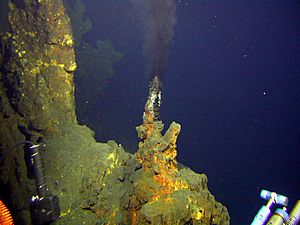 The Brothers Volcano is a Pacific Ocean submarine volcano in the Kermadec Arc, 340 kilometres north east of New Zealand's Whakaari/White Island. Within its oval outline, which measures 13 km by 8 km, it contains a 3 km wide caldera with walls 300-500 m high. It is three times bigger than the White Island. A dacite (dacite lava's viscosity is in between rhyolite and andesite) dome rises 350 m from the caldera floor (which lies 1850 m below sea level), with a smaller dome just to its northeast.

The caldera walls and the larger dome host numerous hydrothermal vents, which send plumes of hot water 750 m up through the water column. It is the most hydrothermally active volcano known in the Kermadec Arc. These hydrothermal vents are also known as hot springs and have created an 8 meter high field of "black smoker" chimneys. These chimneys are created when the hydrothermal fluids hit the cold water and the chemicals in solution are deposited. The hydrothermal fluids are an energy source to many unique species of organisms like tubeworms and bacteria. The marine life and minerals found from these chimneys are beneficial to New Zealand's economy and biotechnology industry.

The volcano was created by subduction of the Pacific Plate under the Australian Plate. It is still unknown when the Brothers Volcano last erupted, but the crater walls tell us that its last eruption was so explosive that it caused the volcano to blow out a caldera. A joint expedition by the United States, New Zealand and Germany mapped the volcano in detail in 2007.

Submarine volcanoes are not monitored by any organization, but have become a central interest in current expeditions.

All content from Kiddle encyclopedia articles (including the article images and facts) can be freely used under Attribution-ShareAlike license, unless stated otherwise. Cite this article:
Brothers Volcano Facts for Kids. Kiddle Encyclopedia.