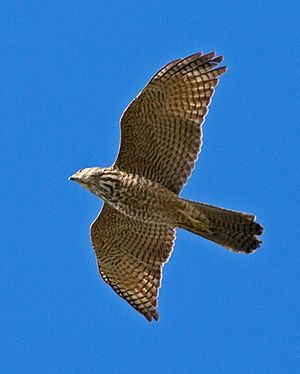 The brown goshawk (Accipiter fasciatus) is a medium-sized bird of prey in the family Accipitridae found in Australia and surrounding islands.

The brown goshawk is widespread through Australia, Wallacea, New Guinea, New Caledonia, Vanuatu and Fiji. In Australia, it is found mainly in eucalypt forests and woodlands, as well as farmland and urban areas. In the Pacific, it mainly inhabits rainforest. It was also found on Norfolk Island to about 1790, and this may be another undescribed subspecies. However, the lack of specimens from Norfolk Island (1 historical skin and 9 subfossil bones is all the material that has been found) means that no genetic test can be conducted.

Brown goshawks feed mainly on other medium-sized birds, while small mammals such as rats and rabbits are also taken. Brown goshawks often hunt near farmland or wetlands, where birds such as ducks, cockatoos and pigeons are plentiful. Smaller prey such as finches, pipits and fairy-wrens are also preyed on, right up to birds the size of domestic fowls and even large, aggressive birds such as currawongs and kookaburras. Bats, small reptiles, amphibians, and large insects are also occasionally eaten.

The main methods of catching prey are still-hunting, by which the goshawk waits on a hidden perch until prey comes within striking distance, and flying through undergrowth attempting to flush out small prey. Less often, goshawks will stoop on prey from above, or even chase small mammals on foot.

When a brown goshawk is discovered by other birds, smaller species panic and flee for cover, while larger birds such as ravens, crows and magpies will aggressively mob it until it leaves the area.

It nests in tall trees on a platform of sticks and twigs lined with green leaves. The clutch size is usually three, sometimes two or four. The incubation period is about 30 days, with chicks fledging about 31 days after hatching.

There are twelve described subspecies:

All content from Kiddle encyclopedia articles (including the article images and facts) can be freely used under Attribution-ShareAlike license, unless stated otherwise. Cite this article:
Brown goshawk Facts for Kids. Kiddle Encyclopedia.