Eucalyptus astringens, commonly known as brown mallet or to Noongar people as mallat, woonert or wurnert, is a tree that is endemic to the South West region of Western Australia. It has smooth, shiny bark on its trunk and branches, lance-shaped leaves, pendulous flower buds arranged in groups of seven, cream-coloured to pale lemon-coloured flowers and cup-shaped to bell-shaped or conical fruit. This tree has also been introduced to Victoria. 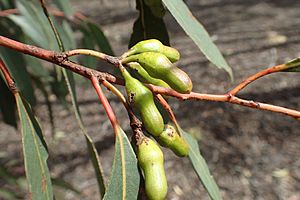 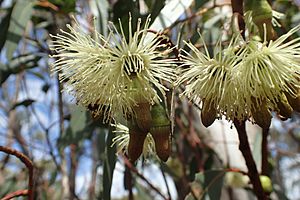 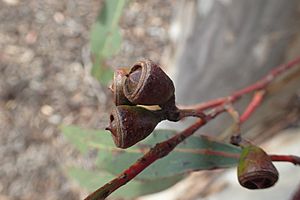 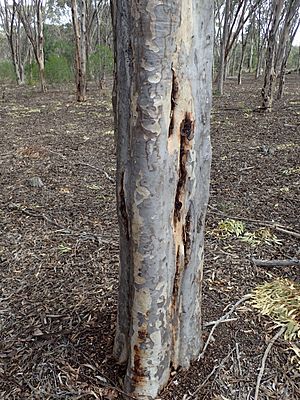 The tree typically grows to a height of 1.5 to 15 metres (5 to 49 ft) and can get to 24 m (79 ft) tall. It has smooth grey-brown coloured bark that peels from the trunk and branches. It blooms from August to December and produces white cream to yellow flowers. At breast height the trunk has a diameter of around 7 m (23 ft). It is drought tolerant and grows in areas with rainfall of 300 to 400 millimetres (11.8 to 15.7 in) per year. The concolorous, glossy, green adult leaves have an alternate arrangement. The leaf blade has a lanceolate shape and are 6 to 14 centimetres (2 to 6 in) long and 1 to 3.5 centimetres (0.4 to 1.4 in) wide. The unbranched inflorescences have an axillary arrangement. Each inflorescence is seven-flowered with flattened peduncles around 3.4 cm (1.3 in) flattened. The buds are pedicellate with a stubby to elongated shape. The fruits that form later are pedicellate and cupular to campanulate. Each fruit is around 1.2 cm (0.5 in) with a diameter of around 1 cm (0.4 in). They each have a level to descending disc with three or four valves containing grey-black seeds with an ovoid to flattened-ovoid shape.

Brown mallet was first formally described in 1911 by Joseph Maiden who gave it the name Eucalyptus occidentalis var. astringens and published the description in the Journal of the Natural History and Science Society of Western Australia. In 1924, Maiden raised the variety to species status in his book A Critical Revision of the Genus Eucalyptus. The specific epithet (astringens) is a Latin word meaning "shrinking" or "binding".

E. astringens has become naturalised in Bacchus Marsh, north of Melbourne, in Victoria, where it had been used to stabilise soils.

The wood from the tree is used for construction, mining timbers and for tool handles. It is also a good firewood. The bark contains around 40% tannin and could possibly be used for tanning leather and production of adhesives. Around 8,000 hectares (19,768 acres) of the tree have been planted around Narrogin in plantations for timber production.

All content from Kiddle encyclopedia articles (including the article images and facts) can be freely used under Attribution-ShareAlike license, unless stated otherwise. Cite this article:
Brown mallet Facts for Kids. Kiddle Encyclopedia.