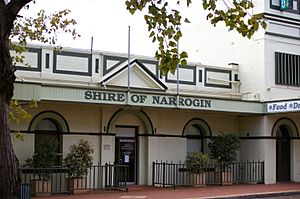 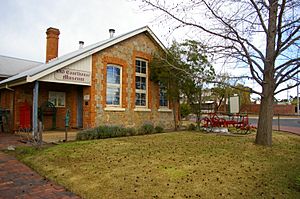 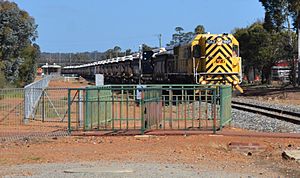 Narrogin is a large town in the Wheatbelt region of Western Australia, 192 kilometres (119 mi) southeast of Perth on the Great Southern Highway between Pingelly and Wagin. In the age of steam engines, Narrogin was one of the largest railway operation hubs in the southern part of Western Australia.

Narrogin is an Aboriginal name, having been first recorded as "Narroging" for a pool in this area in 1869. The meaning of the name is uncertain, various sources recording it as "bat camp", "plenty of everything" or derived from "gnargagin" which means "place of water".

The first Europeans into the Narrogin area were Alfred Hillman and his party who surveyed the track between Perth and Albany in 1835. They passed only 10 km west of the present site of Narrogin. In time they were followed by the occasional shepherd who drove his sheep into the area seeking good pastures.

The area was first settled in the 1860s and 1870s when pastoralists moved and settled in isolated outposts. The population was so scattered that there was no incentive to establish a town.

Narrogin was officially declared a town in June 1897 and it was gazetted as a municipality on 13 April 1906. The early years of settlement were hard with farmers relying on sandalwood cutting and the bark from mallee trees (it was used as a tanning agent) to compensate for poor returns from wheat and sheep.

By early 1898 the population of the town was 60, 35 males and 25 females. The local Agricultural Hall was opened the same year by Frederick Piesse.

The arrival of the Great Southern Railway in July 1889 initiated the first hint of a town. The railway company was in search of good reliable watering points along the route from Perth to Albany. The company that had won the railway contract, the WA Land Company, duly purchased Narrogin pool and it was around this pool that the town developed.

Narrogin remained a major rail centre until the late 1970s when competition from road transport saw a reduction in the railways workforce. By 1987, Narrogin was very much in decline, largely as the result of altered working of engines through from Avon Yard. The station ceased to be served by scheduled passenger trains from 1978. The number of employees dropped from about 280 people to fewer than a dozen in 1995.

Narrogin's previous role as a major railway junction has acted as an attractor for agricultural service industries as well as government departments and agencies. The town has accumulated significant public infrastructure – mainly in the health and education areas. This infrastructure serves as the base for the modern regional centre that Narrogin has become today.

According to the Town of Narrogin, Narrogin is unlike many other rural regional centres throughout Australia and is enjoying a strong and constant growth rate of approximately 2% per year, at the expense of surrounding areas. However, statistics from ABS (Australian Bureau of Statistics) show a steady decline in population from 1981 through to today – 4969 (1981), 4638 (1991), 4419 (2001) and 4219 (2011). It is worth noting that in 2006, the population in Narrogin was 4238, so between 2006 and 2011 the town lost only 19 people. Therefore, the population decline in the town has slowed down significantly.

The Old Court House Museum is a major attraction for tourists. The building was designed by the architect George Temple-Poole and constructed in 1894. The building served as a Government school until 1905, when it became the local courthouse. A local branch of the Agricultural Bank was housed in the building between 1924 and 1945, but in 1970 it was converted again into the local courthouse. Since 1976, the building has been used as a museum, exhibiting displays of regional memorabilia.

In 1951 the Australian Grand Prix was held on a seven kilometre circuit laid out the town's streets. The event attracted a crowd estimated at 35,000, and was won by Warwick Pratley driving an Australian developed car.

The town also acts as a hub for sporting competitions in the surrounding regions. Facilities were improved in recent years with the development of the Narrogin Leisure Complex, which houses a 50m outdoor pool, 25m indoor heated pool with leisure pool, gymnasium, café, squash courts, basketball stadiums as well as a world class wet synthetic hockey turf.

All content from Kiddle encyclopedia articles (including the article images and facts) can be freely used under Attribution-ShareAlike license, unless stated otherwise. Cite this article:
Narrogin, Western Australia Facts for Kids. Kiddle Encyclopedia.