Mecodema antarctica is a carnivorous carabid beetle, the only species in its genus, that burrows in sand above the high tide mark on New Zealand sandy beaches. Bot species were first described by Francis de Laporte de Castelnau in 1867.

Mecodema antarctica is large (up to 25 mm), glabrous reddish brown to black with a distinct "waist" or narrowing between thorax and abdomen (peduncle), like all Mecodema. Indeed, recent DNA analysis places it within that genus, a sister group to Mecodema curvidens; its distinctive differences in body shape may be adaptations to burrowing in sand.

This species legs are well-adapted for digging in sand with greatly expanded coxa, femur and tibia: all tibia are greatly expanded at their distal ends, and the middle and hind pairs are also strongly curved. Other features consistent with dwelling in and on sand are the short antennae, large curved mandibles, and a rather boxy shape in contrast to the longer and more elegant forest Mecodema species. The abdomen of M. antarctica is covered in long setae to further protect it from abrasion. Its larval form was unknown for some time, and was first described in 1978. 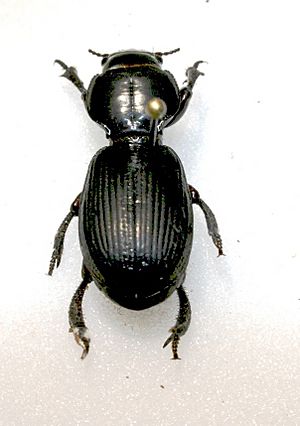 Mecodema antarctica is found in the supralittoral or splash zone of sandy beaches around the New Zealand coast, underneath logs or stones, hiding in the sand during the day and emerging at night to feed. It was described by George Hudson as "usually rare", but is a secretive burrowing beetle, and occasionally is discovered in reasonable numbers. It was rediscovered by schoolchildren on the Whanganui coast in 2006 after not being recorded for many years.

Mecodema antarctica has been recorded being heavily preyed on by katipō spiders, and it may be threatened by the introduced South African spider Steatoda capensis, either as a predator or competitor.

All content from Kiddle encyclopedia articles (including the article images and facts) can be freely used under Attribution-ShareAlike license, unless stated otherwise. Cite this article:
Brullea Facts for Kids. Kiddle Encyclopedia.