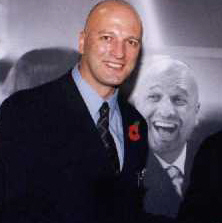 Bryan Gunn (born 22 December 1963 in Thurso) used to be a footballer. He was a goalkeeper. He played for Aberdeen and Hibernian in Scotland, but mostly he played for Norwich City. He also played a few times for Scotland, in the early 1990s.

When he finished playing football, he had many different jobs at Norwich City, working at Carrow Road until he eventually became manager of the team. A terrible 7-1 defeat caused him to lose his job and he has since become a businessman.

One of Bryan Gunn's children died of leukaemia. Since then, he has raised more than £1,000,000 to pay for projects to help people with the disease and to try to find a cure for it.

All content from Kiddle encyclopedia articles (including the article images and facts) can be freely used under Attribution-ShareAlike license, unless stated otherwise. Cite this article:
Bryan Gunn Facts for Kids. Kiddle Encyclopedia.