Buckinghamshire Railway Centre is a railway museum operated by the Quainton Railway Society Ltd. at Quainton Road railway station, about 5 miles (8.0 km) west of Aylesbury in Buckinghamshire, England. The site is divided into two halves which are joined by two foot-bridges, one of which provides wheelchair access. Each side has a demonstration line with various workshop buildings as well as museum buildings. 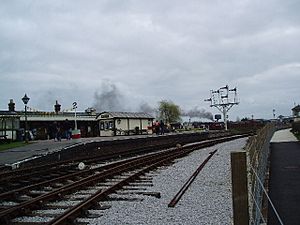 The curved Brill platform at Quainton Road. The short stretch of rail from this platform is the only surviving part of the Brill Tramway.

In 1962, the London Railway Preservation Society was formed. It bought a series of former London Underground vehicles and collectables, and holds the largest collection of London and North Western Railway memorabilia. These were held at various sites around London, mainly two government depots at Luton and Bishop's Stortford, making both access, restoration and preservation difficult.

While other closed stations on the former MR lines north of Aylesbury were generally demolished or sold, in 1969 the Quainton Railway Society was formed to operate a working museum at the station. On 24 April 1971 the society absorbed the London Railway Preservation Society, taking custody of its collection of historic railway equipment.

The station was maintained in working order, used as a bookshop and ticket office. The extensive sidings were still intact, and although disconnected from the mainline in 1967, were used for locomotive restoration work. The Society eventually restored the main station building to its 1900 appearance, renaming the site the Buckinghamshire Railway Centre. A smaller building on the former Brill platform, once a shelter for passengers waiting for Brill and down trains, was used first as a store then as a shop for a number of years before its current use to house an exhibit on the history of the Brill Tramway. A former London Transport building from Wembley Park was dismantled and re-erected at Quainton Road to serve as a maintenance shed. 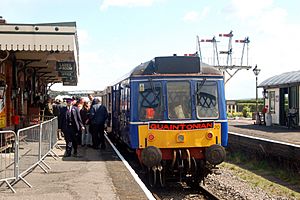 Although the BRC's trains are run on the former station sidings, the station still has a working Network Rail line passing through it. This connects Aylesbury with the Bletchley to Oxford cross-country route at Claydon (LNE) Junction. Regular landfill freight trains and High Speed 2 spoil trains traverse the line from waste transfer depots in Greater London as well as some from the freight terminal at Tytherington and other freight locations in the South-West of England to the former brick pits at Calvert. The High Speed 2 trains also terminate here, but are used for the construction of the new High Speed 2 depot at Calvert.

With an extensively redeveloped site on both sides of the working mainline, BRC houses around 170 items of locomotives and rolling stock, in buildings dating from 1874 to the 1960s. The adjacent World War II warehouses of the Ministry of Food Buffer Depot in the former downside yard have been taken over to display many items awaiting restoration, whilst the Society have added a members' reference library. 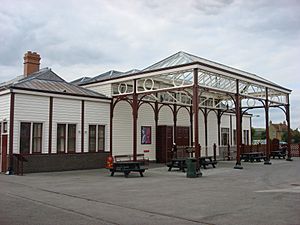 Rewley Road, the Oxford terminus of Harry Verney's Buckinghamshire Railway and of the Oxford to Cambridge Line, closed to passengers on 1 October 1951 with trains diverted to the former GWR Oxford General, the current Oxford station. In co-operation with the Science Museum, Rewley Road was dismantled in 1999. The main station building and part of the platform canopy were then moved to BRC and re-erected in 2002 at the north-west corner of the site, now providing improved visitor facilities and the main offices of the QRS.

As one of the best-preserved period railway stations in England, Quainton Road is regularly used as a filming location for programmes such as The Jewel in the Crown, the Doctor Who serial Black Orchid, Midsomer Murders and Taskmaster.

The collection includes locomotives, carriages, and assorted rolling stock, plus a large amount of memorabilia and documents. 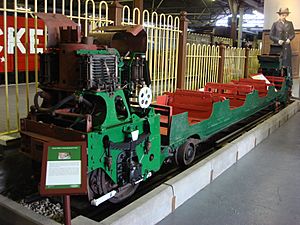 1930 Stock Car No. 803 at the Buckinghamshire Railway Centre

All content from Kiddle encyclopedia articles (including the article images and facts) can be freely used under Attribution-ShareAlike license, unless stated otherwise. Cite this article:
Buckinghamshire Railway Centre Facts for Kids. Kiddle Encyclopedia.