Buddhism in Bangladesh facts for kids 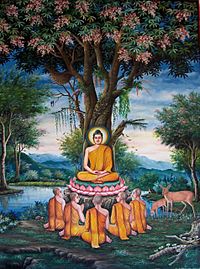 Buddhism is the third largest religion in Bangladesh with about 0.7% of population adhering to Theravada Buddhism. Most of the practitioners are from the south-eastern district of Chittagong and Chittagong Hill Tracts.

All content from Kiddle encyclopedia articles (including the article images and facts) can be freely used under Attribution-ShareAlike license, unless stated otherwise. Cite this article:
Buddhism in Bangladesh Facts for Kids. Kiddle Encyclopedia.