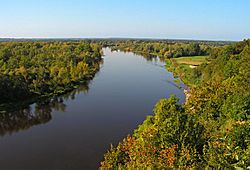 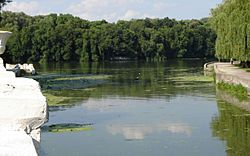 Bug is a name of two rivers in eastern Europe on opposite sides of the European watershed. The (western) Bug flows through western Ukraine, south-western Belarus and Poland. It is 772 km long and empties into the Vistula. The basin of Bug is about 30,420 km2 large.

All content from Kiddle encyclopedia articles (including the article images and facts) can be freely used under Attribution-ShareAlike license, unless stated otherwise. Cite this article:
Bug River Facts for Kids. Kiddle Encyclopedia.