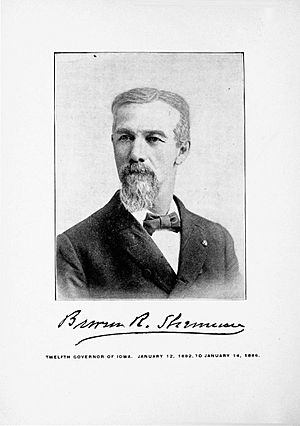 Sherman in the 1900 Iowa Official Register

He studied law after his family moved to Iowa in 1855 and was admitted to the bar in 1859. Sherman then practiced law in Vinton, Iowa in 1860, but only until 1861, when he signed up with the 13th Iowa Volunteer Infantry Regiment for the Union Army. He retired as a captain in mid-1863 due to injuries suffered at Shiloh.

Sherman was elected county judge of Benton County upon his return, resigning from the post in 1866 to accept a position in the office of the clerk of the district court. From 1874 to 1881 he was Iowa's state auditor.

Sherman was elected Governor of Iowa in 1882 and was the first occupant of the governor's office in the Iowa State Capitol; however, it was his successor, William Larrabee, who first occupied the office for a full term.

In 1885, he was awarded an LL.D. from the University of Iowa. He was also a freemason who was especially active in Scottish Rite Masonry and helped found the Des Moines Scottish Rite Consistory.

Sherman died November 11, 1904, and is buried in the Evergreen Cemetery in Vinton, Iowa.

All content from Kiddle encyclopedia articles (including the article images and facts) can be freely used under Attribution-ShareAlike license, unless stated otherwise. Cite this article:
Buren R. Sherman Facts for Kids. Kiddle Encyclopedia.