Burlington is a census-designated place (CDP) in Mineral County, West Virginia, United States, located along U.S. Route 50 (also known as the Northwestern Turnpike) where it crosses Pattersons Creek. As of the 2010 census, its population was 182. It is part of the Cumberland, MD-WV Metropolitan Statistical Area. The ZIP code for Burlington is 26710.

Burlington is the home of the Old Fashioned Apple Harvest Festival (started in 1973), which has grown into the biggest celebration of its kind in the Eastern Panhandle of West Virginia. It is held annually on the first weekend of October.

Burlington is situated along the old Northwestern Turnpike (US 50) in southeastern Mineral County, West Virginia. German and English settlers began to populate the area of Burlington in the second quarter of the 18th century following the surveying of Patterson Creek Manor by Thomas, Lord Fairfax in 1738. 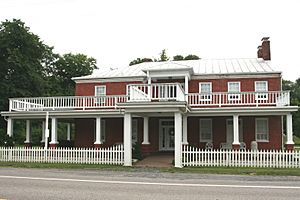 The village took shape around the turn of the 19th century as several mills constructed along Mill Creek and Patterson Creek brought commerce to the region. The Burlington Post Office was established on September 24, 1827. (It was closed from 1844-1853 and from 1860-1867). The construction of the Northwestern Turnpike through Burlington in 1831 helped to further its development into a regional center for commerce. Many of the houses admired for their architecture in the village today were constructed in the first half of the 19th century during this time of economic prosperity. One of the oldest houses in Burlington, the Homestead, was built as a tavern to service the stage coach traffic which came through the village along the turnpike. Constructed by John and Ruth Ann Vandiver, the Homestead continued to serve as an inn and restaurant well into the mid-twentieth century.

During the American Civil War, at least six skirmishes were fought in or near Burlington between Union and Confederate forces in 1861 and 1863. The first three actions took place on September 2, 1861, and April 6 and 26, 1863 between the Ringgold Cavalry of Pennsylvania and confederate forces. On August 4, 1863, the union Washington County Cavalry company fought near the town, and the federal LaFayette County Cavalry company was engaged near it on October 13, 1863. On November 16, 1863, a company of the 2nd Maryland Infantry, Potomac Home Brigade and two Union companies of the 14th West Virginia Infantry were engaged with Confederate forces in a skirmish about three miles south of the town. Three union soldiers, First Lieutenant George W. Hardman, Sergeant Samuel H. Morris and Private William Gardner were killed. 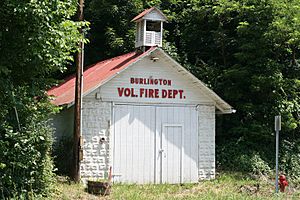 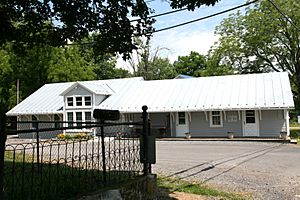 Burlington remains a rural farming community. The Burlington Historic District was added to the National Register of Historic Places in 1992, and includes approximately 25 homes and businesses. 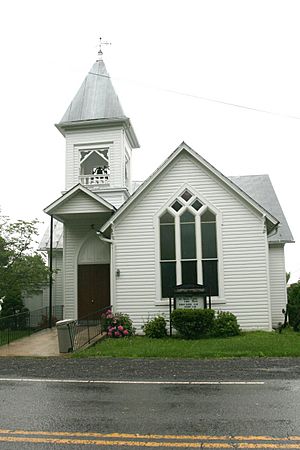 Located near Burlington are Carskadon House, Fairview, Fort Hill, and Travelers Rest, all listed on the National Register of Historic Places.

All content from Kiddle encyclopedia articles (including the article images and facts) can be freely used under Attribution-ShareAlike license, unless stated otherwise. Cite this article:
Burlington, West Virginia Facts for Kids. Kiddle Encyclopedia.