Burngreave ward—which includes the districts of Burngreave, Fir Vale, Grimesthorpe, Pitsmoor, and Shirecliffe—is one of the 28 electoral wards in City of Sheffield, England. It is located in the northern part of the city and covers an area of 7.3 km2. The population of this ward in 2011 was 27,481 people in 9,906 households. It is one of the wards that make up the Sheffield, Brightside and Hillsborough constituency. Most of the ward is served by a free community newspaper, the Burngreave Messenger.

Burngreave is a suburb of Sheffield that started to develop in the second half of the 19th century.

Fir Vale is a suburb of Sheffield. It lies north west of Firshill, and the area in between was historically known as Pitsmoor Firs. 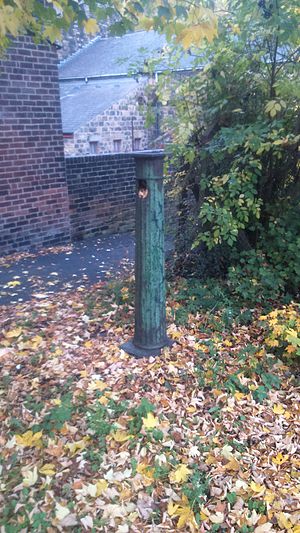 Grimesthorpe is a suburb in north east Sheffield, lying west of Brightside and north east of Pitsmoor.

The settlement originated in the Dark Ages as a farmstead, passing from Grimshaw to Ulfae, the De Buslis, the De Lovetots and then the Dukes of Norfolk. A guide of 1840 describes the appearance of the village as "exceedingly striking, and partakes in some degree of the grotesque", with it main feature being the Grimesthorpe Grinding Wheel Company. The hills around the village had already been extensively quarried.

Grimesthorpe lies below Wincobank hill, and in the nineteenth century was surrounded by woods, which were popular places for walking. The area became somewhat run down in the twentieth century. A nineteenth century village pump survives in the suburb.

Osgathorpe is a small suburb of Sheffield, lying between Shirecliffe and Firvale. It was probably founded by Norse settlers, and was for many years a hamlet largely owned by the Wake family, who were based in the now-demolished Osgathorpe Cottage. The area was largely covered by housing in the nineteenth century. Osgathorpe Park lies in the area.

Pitsmoor is a former village, now a suburb of Sheffield.

Shirecliffe is a suburb of Sheffield, lying west of Grimesthorpe. Its name comes from "scir-cliffe", a bright, steep hillside. In the mediaeval period, the area was owned by the De Mounteney family, who had a seat at Shirecliffe Hall, demolished in the early nineteenth century. In 1676, the hall was home to a congregationalist church, founded by the curates of James Fisher, who had been ejected as Vicar of Sheffield.

This district of Sheffield is home to a large percentage of Sheffield's ethnic minority population as these statistics from the 2001 census show:

All content from Kiddle encyclopedia articles (including the article images and facts) can be freely used under Attribution-ShareAlike license, unless stated otherwise. Cite this article:
Burngreave (ward) Facts for Kids. Kiddle Encyclopedia.