Kids Encyclopedia Facts
Not to be confused with Grimesthorpe, in Sheffield.

Grimethorpe is a large village in the metropolitan borough of Barnsley in South Yorkshire, England. Historically within the West Riding of Yorkshire, it had a population of 4,672 at the 2011 census. Grimethorpe is located to the east of Barnsley and south of Hemsworth; until the local government reorganisation of 1974, it was part of the Hemsworth district and constituency. At the 2011 Census the village was part of the North East ward of Barnsley MBC.

For much of the 20th century Grimethorpe's economy was rooted in coal mining. Since the 1984–85 miners' strike accelerated the downscale of UK coal mining and international cheap open-cast mining provoked closure of its colliery in May 1993.

There are new roads linking the village to some of the country's major arteries, about 50 businesses have moved in, including the online fashion retailer ASOS.

It is believed the name Grimethorpe originates from "Grim's Torp", a mixture of Anglo-Saxon and Viking names, meaning a torp or hamlet owned by a Viking named Grimey. Grimethorpe is at the foot of the hill upon which is the village of Brierley. In fact, Grimethorpe was likely named such as a Norse farm built close to Brierley village. Following the Norman conquest, the Brierley-Grimethorpe area came under the rule of the De Laceys of Pontefract, with a local Saxon owner. In 1066, this owner was Ernui who was said to have six carucates of land at Brerelia and Hindelia, valued at forty shillings. (A carucate was as much land as could be ploughed in one year by one plough and eight oxen. An acre was as much land as could be ploughed in one day by one plough and a pair of oxen.)

This land was given after the Norman conquest to Airic who was given the whole of Staincross wapentake by Ilbert de Lacey, the Norman of Pontefract. All of Yorkshire was divided into wapentakes, Staincross being the one for Barnsley area. It was about ten miles from north to south and about twenty miles from east to west, its boundaries being in the northeast the high ridge on which Brierley stands and in the southwest the water shed of the Pennines. A stone cross called Ladycross was erected near Grimethorpe, probably by the monks of Monk Bretton Priory, as a place of sanctuary, there being an old law protecting people on Church lands. The Ladycross figures on many deeds relating to the priory. The Lady referred to in the place names of Ladycross, Ladywell and Ladywood is probably Mary Magdalene to whom Monk Bretton Priory was dedicated.

On a well- hidden site between Brierley and Grimethorpe stood the fortified Manor of Hall Steads (the name means 'hall site'), which belonged to the early Brereley estate. Hall Steads is not mentioned until 1284 in connection with a later Lord of Brierley Manor. Hall Steads was surrounded first by a high, stone wall and then by the moat. The site covered an area of about five acres. The building was mainly of local sandstone and many of the stones can still be seen in the soil. Fragments of 14th and 15th century pottery have been found amongst these stones.

Remediation of a slag heap in 2006; left from Grimethorpe's mining days.

The 1981 census recorded 44% of Grimethorpe workers as miners. The two pits in the village were 'Grimethorpe' and 'Ferrymoor' which merged with 'Riddings' in 1967, which in turn merged with 'South Kirkby' in 1985. Grimethorpe colliery was one of the deepest pits in Britain and, following similar mergers with 'Houghton Main' and 'Dearne Valley', employed 6,000 men at the time of its closure in May 1993. During mid-October of the 1984-85 miners' strike, there was a series of riots in Grimethorpe and local residents complained that the policing was too heavy-handed. Relations between the community and the police remained very cold for the next decade. 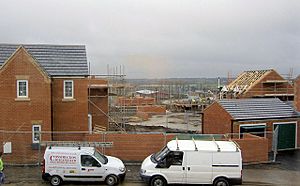 New private housing being built in Grimethorpe as part of its regeneration in 2005.

Several regeneration projects have taken place. The Dearne Valley link roads have been constructed and Park Springs Industrial Estate has been developed. This has brought many jobs to the area especially the construction of a huge unit occupied by South Yorkshire-based furniture company Symphony. The village has seen the construction of three private housing estates, a medical centre, dental surgery and village hall. Regeneration was praised by former Deputy PM Lord Prescott on his visit in March 2010.

Grimethorpe is known for its past as a mining village, its brass band, the Grimethorpe Colliery Band, and was used as the location for the film Brassed Off – a black comedy which tells the plight of the village and the effect on its band. In 2010 Grimethorpe Colliery band recorded a version of the hymn "Jerusalem" which was played when the English team won a gold medal at the 2010 Commonwealth Games in India.

In 2018 former Barnsley FC player Bruce Dyer opened a branch of his 'love life' football academy in the village.

In the Viz comic strip Billy the Fish, the fictional Grimethorpe City is the arch-rival of Fish's team Fulchester United.

Former schools include Springvale Junior and Middle School, which burned down in the 1980s.

All content from Kiddle encyclopedia articles (including the article images and facts) can be freely used under Attribution-ShareAlike license, unless stated otherwise. Cite this article:
Grimethorpe Facts for Kids. Kiddle Encyclopedia.