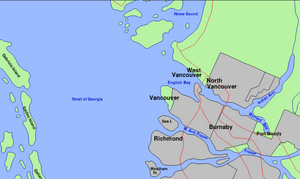 Map of the Burrard Peninsula (right centre). The map is oriented with north-northwest facing up. The peninsula is flanked by Burrard Inlet to the north and the Fraser River delta to the south. 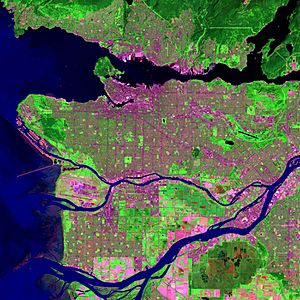 Satellite photo of Vancouver region, with the western and central sections (Vancouver, Burnaby, and New Westminster) of the Burrard Peninsula visible.

The Burrard Peninsula (Squamish: Ulksencode: squ is deprecated ) is a peninsula in the Lower Mainland region of southwestern British Columbia, Canada, lying between Burrard Inlet to the north and the Fraser River to the south, and bounded by Georgia Strait on the west and the Pitt River on the east. The City of Vancouver occupies most of the western half of the peninsula.

The Squamish name for the Burrard Peninsula as a whole—or rather, for the long rise of land from Point Grey to Central Park, was Ulksen or Ulxen. The name Burrard Peninsula is rarely used in casual reference to the area among locals in favour of a specific community or neighbourhood therein.

There is no clear consensus on where the peninsula ends, as the Burrard Peninsula does not appear in official government gazetteers (directories of geographical features) and does not exist as a legal entity, and so has no legal definition. The peninsula is, however, attached to the mainland at its northeastern end, and as a matter of convenience, the isthmus may be taken to follow the main line of the Canadian Pacific Railway (CPR) across the relatively narrow, low neck of land from Port Moody at the eastern end of Burrard Inlet, through Coquitlam and Port Coquitlam southeast to the Pitt River. From where the CPR tracks cross the Pitt River, the Burrard Peninsula runs due west for approximately 40 kilometres (25 mi) to Point Grey, a prominence protruding into Georgia Strait. The peninsula is approximately 6 to 8 kilometres (4 to 5 miles) wide for much of its length.

Municipalities on the peninsula include—in roughly west-to-east order—the Cities of Vancouver, Burnaby, New Westminster, Port Moody, Coquitlam, and Port Coquitlam. The University Endowment Lands (home to the main campus of the University of British Columbia) occupy unincorporated territory at the far west end of the peninsula, at Point Grey. North of the isthmus separating the peninsula from the mainland are the Villages of Belcarra and Anmore which are not on the peninsula proper, but are only accessible by road via the Burrard Peninsula.

The Burrard Peninsula consists for the most part of a hilly plateau, reaching a maximum height in most places of between 100 and 150 metres (300 and 500 feet) above sea level. The plateau is bisected by a low trench running northwest to southeast, consisting of (running from west to east):

Punctuating the plateau are several prominences of land including Little Mountain (a dormant volcano, approximately 170 metres above sea level) in Vancouver, and Capitol Hill (approximately 220 metres) and Burnaby Mountain (home to the main campus of Simon Fraser University; approximately 380 metres) in Burnaby. The plateau is flanked at its eastern end by the Coquitlam River, which flows south from Coquitlam Lake on the mainland into the Fraser River, its mouth lying upstream from the Brunette River. The land east of the Coquitlam River is largely flat and lying close to sea level, except for the stand-alone rise of Mary Hill in Port Coquitlam (approximately 70 metres).

The Burrard Peninsula has been extensively urbanized, and includes the largest and densest populations in the Metro Vancouver region, and in British Columbia more generally.

While originally extensively forested, since the mid-19th century the Burrard Peninsula has gradually become essentially one large cityscape. Its largest remaining green spaces include Pacific Spirit Regional Park in Point Grey, Stanley Park in Downtown Vancouver, the areas around Burnaby Mountain, Central Park, Burnaby Lake, and Deer Lake in Burnaby, and Mundy Park and the Coquitlam River in Coquitlam.

All content from Kiddle encyclopedia articles (including the article images and facts) can be freely used under Attribution-ShareAlike license, unless stated otherwise. Cite this article:
Burrard Peninsula Facts for Kids. Kiddle Encyclopedia.