Butser Ancient Farm is an archaeological open-air museum located near Petersfield in Hampshire, southern England. Butser features experimental reconstructions of prehistoric, Romano-British and Anglo-Saxon buildings. Examples of Neolithic dwellings, Iron Age roundhouses, a Romano-British villa and an early Saxon house are on display. The site is used as both a tourist attraction and a site for the undertaking of experimental archaeology. In this latter capacity, it was designed so that archaeologists could learn more about the agricultural and domestic economy in Britain during the millennium that lasted from circa 400 BCE to 400 CE, in what was the Late British Iron Age and Romano-British periods.

Founded in 1970 by the Council for British Archaeology, in 1972 they recruited experimental archaeologist Peter J. Reynolds to run the site as project director. It was initially located on the site of a Bronze and Iron Age farmstead on Butser Hill, but in 1989 relocated to Hillscombe Down, and in 1991 to Bascombe Copse on the slopes of Windmill Hill.

The farm is open to the public and runs various events throughout the year. Archaeologist Mick Aston commented that "Virtually all the reconstruction drawings of Iron Age settlements now to be seen in books are based" on the work at Butser Farm, and that it "revolutionised the way in which the pre-Roman Iron Age economy was perceived".

Butser Ancient Farm was founded in 1970 by the Council for British Archaeology: the driving force behind its foundation was the RCHME archaeologist Collin Bowen. In 1972, they recruited experimental archaeologist Peter J. Reynolds (1939–2001) as director. The farm was named after its original site at Little Butser, a northerly spur of Butser Hill, a few kilometres from Petersfield in Hampshire. In the original Bronze and Iron Ages, a farmstead had been found on Little Butser, whose occupants had farmed the valley to the north and east.

In 1976 a second site, known as the Ancient Farm Demonstration Area (AFDA), was opened at Hillscombe Down on the southern slopes of Butser Hill, about a kilometre away from the main Farm. This was primarily designed to be a public site which could act as an educational resource for schoolchildren, and it was intended that this would take away the visitor pressure from the original site, where the large numbers of visitors (at times over a thousand people turned up to open days) were getting in the way of the experimental archaeology. The first Butser Farm site at Little Butser was subsequently closed down in 1989.

In 1991 the project moved to Bascomb Copse on the slopes of Windmill Hill, Hampshire between Chalton and Clanfield, about 5 km from the original site.

Buildings at the farm include simulated pre-Roman roundhouses and a simulated Roman villa. The 'Longbridge Deverell House' was the first full-sized roundhouse to be built at the latest site, and at the time one of the largest in Europe.

After Peter's death in 2001, the site was run by his partner, Christine Shaw, for a number of years. Under her guidance, one of Peter's projects, a Roman building, was completed, resulting in the first full scale construction simulation of the wing of a Romano-British villa from Sparsholt, near Winchester. It was financed with the support of the Discovery Channel, and was filmed for a ten-part series for television.

In 2006/7, a management team was assembled, and with Christine's guidance, took over the running of the Butser Project. The management team consists of Simon Jay and Maureen Page, running the farm under the business "Butser Education CIC".

It was also in 2006 that the 'Longbridge Deverell House' started to collapse, and prompted a programme of redevelopment of the constructions across the farm. A major re-assessment of the techniques of building was undertaken. It was decided to use the opportunity to examine the accumulated information of a further 20 years of excavation evidence.

Following the dismantling of the 'Longbridge Deverell House', the replacement is based on the excavations of the 'Little Woodbury House'. Under the leadership of David Freeman, construction started in February 2007 and finished in December, having gone through one of the wettest summers on record. 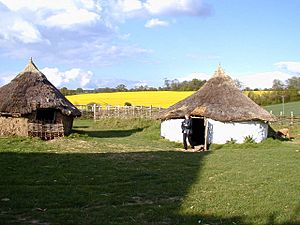 A reconstrucure of a round house at Butser Ancient Farm. 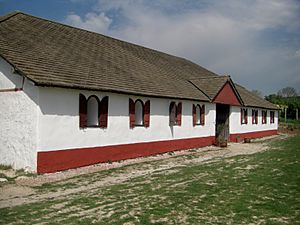 There is also a reconstructed Roman villa at the site. The construction is based on the western wing of Sparsholt Roman Villa which was excavated between 1965 and 1972. The building includes a functioning hypocaust system.

The Doctor Who serial "The Mysterious Planet" was filmed at the farm. An episode of the 2005 BBC Television documentary series What the Ancients Did for Us examining the ideas and inventions of the Ancient Britons was filmed here.

All content from Kiddle encyclopedia articles (including the article images and facts) can be freely used under Attribution-ShareAlike license, unless stated otherwise. Cite this article:
Butser Ancient Farm Facts for Kids. Kiddle Encyclopedia.