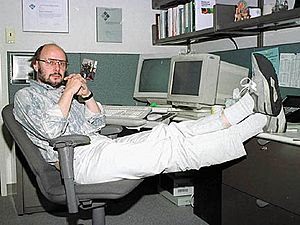 Bjarne Stroustrup, the creator of C++

C++ runs on a variety of platforms, such as Windows, Mac OS, and the various versions of UNIX. C++ is simple and practical approach to describe the concepts of C++ for beginners to advanced software engineers.

The following text is C++ source code and it will write the words "Hello World!" on the screen when it has been compiled and is executed. This program is typically the first program a programmer would write while learning about programming languages.

This program is similar to the last, except it will add 3 + 2 and print the answer instead of "Hello World!".

This program subtracts, multiplies, divides and then prints the answer on the screen.

All content from Kiddle encyclopedia articles (including the article images and facts) can be freely used under Attribution-ShareAlike license, unless stated otherwise. Cite this article:
C++ Facts for Kids. Kiddle Encyclopedia.