Cabazon Dinosaurs, formerly Claude Bell's Dinosaurs, is a roadside attraction in Cabazon, California, featuring two enormous, steel-and-concrete dinosaurs named Dinny the Dinosaur and Mr. Rex. Located just west of Palm Springs, the 150-foot-long (46 m) Brontosaurus and the 65-foot-tall (20 m) Tyrannosaurus rex are visible from the freeway to travelers passing by on Southern California's Interstate 10. The roadside dinosaurs are best known for their appearance in the film Pee-wee's Big Adventure (1985).

Sculptor and theme park artist Claude Bell began construction of the dinosaurs in 1964 with the goal of attracting more customers to his nearby restaurant, the Wheel Inn (open from 1958 to 2013). Dinny and Mr. Rex were completed in 1975 and 1986, respectively. Bell died in 1988 at age 91 and his family sold the property in the mid-1990s. Since then, Cabazon Dinosaurs has been the site of a roadside creationist museum and giftshop. 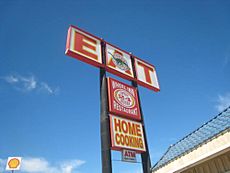 The Wheel Inn Restaurant, once owned by Claude Bell, and now closed.

The creation of the Cabazon dinosaurs began in the 1960s by Knott's Berry Farm sculptor and portrait artist Claude K. Bell (1897–1988) to attract customers to his Wheel Inn Restaurant, which opened in 1958 and closed in 2013. Dinny, the first of the Cabazon dinosaurs, was started in 1964 and created over a span of eleven years. Bell created Dinny out of spare material salvaged from the construction of nearby Interstate 10 at a cost of $300,000. The biomorphic building that was to become Dinny was first erected as steel framework over which an expanded metal grid was formed in the shape of a dinosaur. All of it was then covered with coats of shotcrete (spray concrete). Bell was quoted in 1970 as saying the 45-foot-high (14 m), 150-foot-long (46 m) Dinny was "the first dinosaur in history, so far as I know, to be used as a building." His original vision for Dinny was for the dinosaur's eyes to glow and mouth to spit fire at night, predicting, "It'll scare the dickens out of a lot of people driving up over the pass." These two features, however, were not added.

A second dinosaur, Mr. Rex, was constructed near Dinny in 1981. Originally, a giant slide was installed in Rex's tail; it was later filled in with concrete, making the slide unusable. A third woolly mammoth sculpture and a prehistoric garden were drafted but never completed due to Bell's death in 1988. 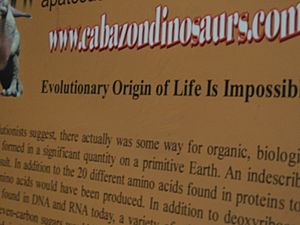 Exhibits and displays inside Dinny detail arguments for young Earth creationism and against evolutionism. This one concludes that the "Evolutionary Origin of Life Is Impossible". 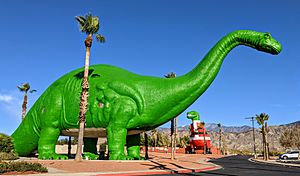 Following the sale of the property by Bell's surviving family in the mid-1990s, Cabazon Family Partnership and MKA Cabazon Partnership of Costa Mesa, California, became the new owners of the roadside attraction. The partnership obtained approval for an expansion of the Cabazon dinosaur site in 1996 with the land-use approvals, including restaurants, a museum and gift shop, and a 60-room motel at the Main Street exit in Cabazon. Orange County developer and MKA partner Gary Kanter said the original vision has been for MKA to transform the area into a children's science and museum exhibit.

Currently located inside Dinny are a gift store and museum promoting creationism, with some of the toy dinosaurs in the shop sold under the label "Don't swallow it! The fossil record does not support evolution." The current ownership has expressed a young Earth creationist belief that most dinosaurs were created on Earth about 6,000 years ago – the same day as Adam and Eve. In stark contrast to that belief are Bell's painted frescoes and sculptures inside Dinny, depicting a naturalist and evolutionary viewpoint. Bell's paintings include representations of Cro-Magnon man (labeled "Cro-Magnon Man 30,000 [years ago]") and Java Man (labeled "Java Man 400,000"). Bell's historic displays now exist alongside information detailing the creationist viewpoint of the earth and man's origins.

The Cabazon Dinosaurs attraction also features an open-air museum with fiberglass and robotic dinosaurs. Other activities at the site include a sand pit where visitors can experience a "dino dig" as well as a gemstone and fossil-panning sluice. Pastor Robert Darwin Chiles, assisting Kanter in turning the exhibit into a non-denominational church, has been quoted as to his belief of why children are drawn to the dinosaur attraction: "There's something in their DNA that knows man walked with these creatures on Earth." Chiles and Kanter plan to promote their views of creationism at the attraction based on their interpretation of the Book of Genesis.

All content from Kiddle encyclopedia articles (including the article images and facts) can be freely used under Attribution-ShareAlike license, unless stated otherwise. Cite this article:
Cabazon Dinosaurs Facts for Kids. Kiddle Encyclopedia.