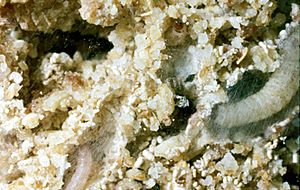 Ephestia elutella, the cacao moth, tobacco moth or warehouse moth, is a small moth of the family Pyralidae. It is probably native to Europe, but has been transported widely, even to Australia. A subspecies is E. e. pterogrisella.

The wingspan is 14–20 mm. This moth flies throughout the warmer months, e.g. from the end of April to October in Belgium and the Netherlands.

The caterpillars are often considered a pest, as they feed on dry plant produce, such as cocoa beans and tobacco, as well as cereals and dried fruit and nuts. Less usual foods include dried-out meat and animal carcasses, specimens in insect collections, and dry wood.

This species has been known under a number of junior synonyms:

All content from Kiddle encyclopedia articles (including the article images and facts) can be freely used under Attribution-ShareAlike license, unless stated otherwise. Cite this article:
Cacao moth Facts for Kids. Kiddle Encyclopedia.