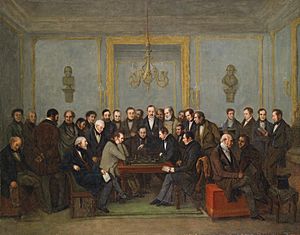 The famous chess match between Howard Staunton and Pierre Saint-Amant, on 16 December 1843

The Café de la Régence was a meeting place for chess players in Paris, France. It was the most famous chess meeting-place for over a century. The building was a coffeehouse in the centre of Paris, founded in 1688 and named in 1718. At first, it was under the patronage of the Duc d'Orleans, and attracted a literary crowd.p417

Chess players moved there en masse around 1740. The clientele included amateurs, such as Voltaire, Rousseau, Robespierre, Benjamin Franklin and Napoleon. The leading professionals, Deschapelles, La Bourdonnais, Verdoni and Philidor, were there every day when they were in Paris.p65 Staunton played his match against Saint-Amant there; Paul Morphy played there in 1858, including his match with Anderssen. The café was moved in 1855. The chess room was finally closed in 1916.

All content from Kiddle encyclopedia articles (including the article images and facts) can be freely used under Attribution-ShareAlike license, unless stated otherwise. Cite this article:
Café de la Régence Facts for Kids. Kiddle Encyclopedia.