Cahercommaun (Irish: Cathair Chomáin), sometimes Cahercommane, is a triple stone ringfort on the south-east edge of the Burren area, in Kilnaboy, near the rural village of Carran, in County Clare, Ireland. It was built in the 9th century. 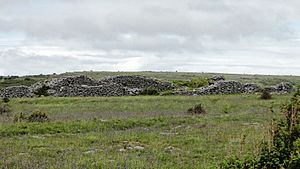 Cahercommaun sits on the edge of an inland cliff facing north overlooking a wooded valley, with three concentric walls reaching to the cliff edge. The inner wall alone used 16,500 tons of stone. The outer wall measures some 350 ft east-west by 245 ft north-south. The inner wall is about 5 ft thick and 4 ft high and rises 12 to 14 feet above the cliff. The innermost wall, which is the thickest, forms an almost complete circle, but the two outer walls (connected with each other by subsidiary walls, like a fan) only form a semicircle. The innermost wall contains three chambers within the wall.

In a six-week period in 1934 it was excavated by the Third Harvard Archaeological Expedition, led by Hugh O’Neill Hencken, which found that the roughly circular enclosure contained at least twelve stone buildings at various times, some of which had souterrains. The archaeologists concluded that Cahercommaun would have been home to a group of at least 40 people, and among the artefacts discovered were wooden spindles used in weaving. A silver brooch found in one of the souterrains indicates that the site was already in existence by the 9th century AD. The brooch, similar in design to the Tara brooch, is in the National Museum of Ireland in Dublin. In addition to the brooch, a padlock was found.

Some of the conclusions drawn from the work of the Harvard expedition, especially on the period in which the fort was inhabited, have since been revised in light of new information, but the 1934 excavation provided a valuable starting point and basis for further work.

The excavation uncovered one of the most important Iron Age collections found in Ireland. From the collection, a set of sheep shears and a saddle quern are on loan to the Clare Museum from the Irish Antiquities Division of the National Museum of Ireland. Evidence was found of settlement dating back to the 5th century and 6th century, although the fort was built during the 9th century. The saddle quern dates from the Late Neolithic/Early Bronze Age period.

All content from Kiddle encyclopedia articles (including the article images and facts) can be freely used under Attribution-ShareAlike license, unless stated otherwise. Cite this article:
Cahercommaun Facts for Kids. Kiddle Encyclopedia.