Caihong (Chinese: 彩虹; pinyin: cǎihóng; literally: "rainbow") is an extinct dinobird from Late Jurassic China. Caihong was discovered in 2014. The animal may predate the famous Aurornis xui, the earliest bird, by about 1 million years.

The type species, Caihong juji, was named in 2018. 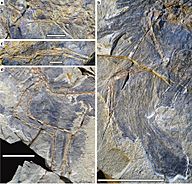 The shoulder girdle and limbs of Caihong 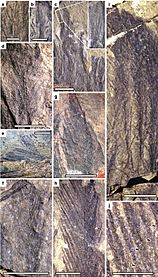 Feathering on different areas of PMoL-B00175

The skull of Caihong has a length of 67.6 millimetres. It is low and elongated (superficially similar to that of Velociraptor), only slightly shorter than the femur.

The fossilized feathers of Caihong showed similarity to a black iridescent color in extant birds. Other feathers found on the head, chest, and the base of the tail preserve flattened sheets of platelet-like melanosomes.

All content from Kiddle encyclopedia articles (including the article images and facts) can be freely used under Attribution-ShareAlike license, unless stated otherwise. Cite this article:
Caihong Facts for Kids. Kiddle Encyclopedia.