Kids Encyclopedia Facts
Not to be confused with Caisson (lock gate). 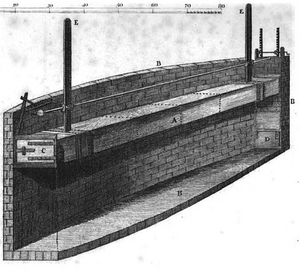 Contemporary engraving of the lock at Combe Hay

The caisson lock is a type of canal lock in which a narrowboat is floated into a sealed watertight box and raised or lowered between two different canal water levels. It was invented in the late 18th century as a solution to the problem posed by the excessive demand for water when conventional locks were used to raise and lower canal boats through large height differences. Such locks, each of which would only raise and lower boats through small height differences of a few feet, would not suffice when large height differences had to be tackled nor when water was in short supply. The caisson (or caisoon) was thought to be one solution, although it transpired that the technology of the day was not capable of achieving this type of construction economically.

It was designed primarily as a water-saving measure, and also was an attempt to minimise construction costs compared with other engineering solutions of the time. In use it was capable of replacing up to seven conventional locks. Other design benefits were speed of boat descent/ascent, and only a little loss of water when operating compared with a conventional boat lock.

The caisson lock was first demonstrated at Oakengates on a now lost section of the Shropshire Canal in 1792, where its inventor, Robert Weldon (b:?1754 to d:1810) built a half-scale model. He claimed that his design would solve the problem of water supply in dry seasons or at greater elevations, be cheaper than building aqueducts or tunnels, and be quicker to operate than the number of surface locks his design could replace. He patented his invention as the 'Hydrostatick Caisson Lock'. The full-sized box, or "trunk", would probably have displaced about 270 tonnes and weighed about 170 tonnes, including the water in it, so about 100 tonnes of ballast would have been needed to give neutral buoyancy. The box would have needed to be strong enough to withstand the pressure of 50 ft (15 m) of water i.e. about 150 kPa (22 psi) gauge pressure at the bottom of the chamber.

The proprietors of the Kennet and Avon Canal Company had inspected Weldon's device. The Somerset coal field was opening up, and was to be served by a Somerset Coal Canal feeding into the wider canal system by means of the Kennet and Avon, whose owners would greatly benefit from the development. However, the Somerset Coal Canal suffered from serious water supply problems at Combe Hay; and the Kennet and Avon Company suggested Weldon's innovation as the solution. Three caisson locks were proposed, each to be 80 ft (24 m) long and 60 ft (18 m) deep and containing a closed wooden box which could take the boat. This box moved up and down in the 60 ft (18 m) deep pool of water, which never left the lock.

The first lock was completed in 1797 under Weldon's supervision. The device was demonstrated to the Prince Regent (later George IV), but was found to suffer from various engineering problems, possibly caused by the soft fuller's earth rock stratum in the area.

The system depended on the submerged, sealed box (the "caisson", from the French for "large chest") being heavily ballasted to achieve neutral buoyancy, so it was never possible in ordinary operation to lift it to water level to allow a descending boat to float in. Instead, a masonry chamber ("cistern") was built with walls higher than the water level in the top pound and itself filled completely with water, so that even at its upper position the box remained below the surface. A vertically sliding outer door sealed the lock chamber from the top pound and kept the water in.

The mechanism was operated from the top level. For a descent, the box was first wound into its upper position using a double rack-and-pinion mechanism, then drawn tightly against the frame of the opening using a ratchet mounted on the top of the wall. The outer door was then drawn up with another rack-and-pinion. At this point the water levels in the top pound and inside the box would have been roughly equal, but as the inner door – the box door – swung outwards horizontally (like a normal single lock gate) it would not open if the outer level was to any extent higher. A small equalising cock was therefore provided. The door was opened, the boat was floated in, the doors closed and the ratchet released. Because the entering boat would displace its weight of water back into the pound, the total weight of the box was always the same and no great endeavour was needed to wind it up and down. However, the operators could release a little water into the box to assist the descent. Water pressure against the outward-opening doors kept them firmly closed and watertight.

At the lower position the process was reversed. Here the water pressure was strong enough to press the box tightly into position against the exit opening. Another rack and pinion (again operated from above) lifted the outer gate, the levels were equalised again, the inner door on the box was swung open and the boat floated out. Apart from the inevitable small leakages, no significant amount of water had been used in the process.

The caisson lock may be considered as a submerged form of the boat lift, with which it was approximately contemporaneous. Each has both advantages and disadvantages, for the engineering of this time.

The disadvantages of the caisson lock are the need to provide a sealed, submerged and safe caisson – especially if the crew or even passengers remain on board.

The caisson lock can however be powered, and the caisson lifted, by buoyancy alone. Pumping ballast water in and out of the caisson is enough to float it up or down the lock chamber. The weight of ballast water is approximately that of the canal barge being lifted. The boat lift though needs a mechanical lift system. In most vertical lift systems, this must also lift or lower the weight of the caisson and its water contents as well. This is substantially more than the barge alone, and the power to lift it is supplied mechanically. At the time of their development, the steam engine was in its infancy. Steam engines had been developed as water pumps, but not yet for the supply of mechanical power (see rotative steam engine). Given the engineering constraints of the time, lifting an enclosed caisson by buoyancy was more practical than driving a boat lift.

Small boat lifts could have driven by water supply or pumping between two balanced cars. Practical examples of these though were no bigger than a vertical funicular, used to lift small mine trams.

The May 1799 test, above, occurred when a party of investors was aboard the vessel and they nearly suffocated before they could be freed. Work on the second lock was suspended (the third lock had not been started) and early in the following year an inclined plane, to carry boats’ cargoes in wheeled tubs, was built instead. Eventually a flight of nineteen locks on a longer alignment up the slope was constructed, with a Boulton & Watt Steam Pumping Station, capable of lifting 5,000 tons of water in 12 hours, used to recirculate the water.

In April 1815 the Regents Canal Company built a double caisson lock (or "hydro-pneumatic lock") at the site of the present-day Hampstead Road Lock, north London. The designer was military engineer William Congreve. Here the motivation was, principally, water supply problems but also to effect a quicker passage of vessels, as those going in opposite directions could pass in the lock. The caissons—always submerged, as at Combe Hay—were without bottoms and were arranged so that their sides dropped into deep underwater channels formed by "minor walls" inside the main walls. The vertical movement of the two caissons was effected by a balance pipe ("the channel of communication") passing under the lock floor between the two caisson chambers (but with a slight upturn to reach above the water levels), so that causing an increase of water level in one caisson ("the water of compression") displaced air through the pipe, thus forcing a corresponding decrease in the water level in the other. This increased the buoyancy of the latter caisson, which accordingly rose as the first sank. A connecting underwater chain passing through rollers, while not in itself doing any work, controlled the relative positions. Boats were admitted through double gates; the inside ones on the caisson "adjusted to fit close [sic] to those of the outer". Congreve's patent then envisaged that having achieved "absolute equipoise" (neutral buoyancy) a rack-and-pinion, removable weights or a small winch could overcome inertia and move the caissons. In a practical demonstration at Hampstead Road Congreve later elected to deploy an air compressor releasing into one caisson, estimating that one man could achieve raising and lowering in three minutes—the company's enabling act did not permit the installation of stationary steam engines. However it was found the fastest overall time was six minutes and that the effort required rendered the operator "incapable of further exertion". Furthermore, as the operation of the device depended upon air pressure inside the caissons (whether the means of moving them was by varying this air pressure or otherwise) when contractor Henry Maudslay delivered them and they were found to leak air, the scheme failed. In 1818, after many unsuccessful repair attempts, the company substituted conventional locks.

A patent granted to Jonathan Brownill, a cutler from Sheffield, on 1 May 1828, while in principle operating as an open-air balance lock, was described as using three caissons. The main caisson was connected by ropes passing over grooved pulleys to two smaller, counterbalancing caissons. Brownill's innovation was to place wedges ("inclined planes") opposite the upper and lower fixed openings so that as the main caisson moved into place, powered by water being added or released from the counterbalancing caissons, rollers acting against the wedges forced it against a padded frame surrounding the opening. The "conductor" was to have control of a lever to release the rollers when the vertical gates were slid shut for the next ascent or descent.

No commercially successful example has ever been built.

All content from Kiddle encyclopedia articles (including the article images and facts) can be freely used under Attribution-ShareAlike license, unless stated otherwise. Cite this article:
Caisson lock Facts for Kids. Kiddle Encyclopedia.