Caledonia Place is a late 18th-century terrace of 31 Georgian houses, located between West Mall and Princess Victoria Street in the Clifton area of Bristol. The postcode is within the Clifton ward and electoral division, which is in the constituency of Bristol West.

Caledonia Place was completed in 1843 by architects T Foster and W Okely, The area has Grade II listed buildings and has mid Georgian style. Each three storey house has an attic and basement and has rear elevations differentiated by fine cast-iron Grecian balconies. In 1852, Lord Macaulay once lived at number 16 Caledonia Place.

Numbers 32 to 44 Caledonia Place was completed in 1788 to the design of Bath architect and surveyor, John Eveleigh. The central and end houses of the terrace are pedimented and broken forward with the variation giving the terrace a palatial appearance. Numbers 43 and 44 were converted into one in 1922 to form a bank.

The Mall, one of Clifton’s thriving commercial thoroughfares, and to the southern end of the terrace is the Avon Gorge and Clifton Suspension Bridge are close by. 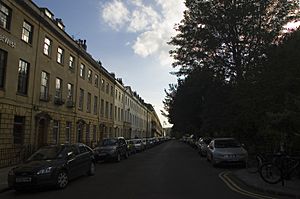 The eastern end of the terrace. 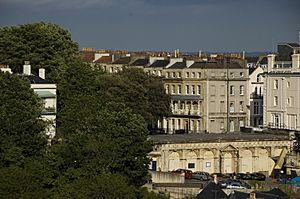 The western end of the terrace, from Clifton Suspension Bridge

All content from Kiddle encyclopedia articles (including the article images and facts) can be freely used under Attribution-ShareAlike license, unless stated otherwise. Cite this article:
Caledonia Place, Bristol Facts for Kids. Kiddle Encyclopedia.