The island is the largest one in Greenwich waters. More than half of the island (on the west side) is a bird sanctuary off-limits to members of the public without permission to visit. The island is available for overnight stays for those with permits, otherwise the east side is open from dawn till dusk.

The island is home to cowbirds, yellow warblers, starlings, catbirds, diamondback terrapins, ospreys, great blue herons and canada geese. great and snowy egrets can also be seen there. sassafras, hickory, maple and beech trees, along with oriental bittersweet and multiflora roses, grow there. 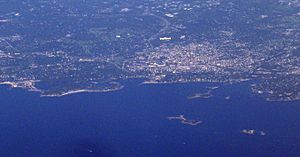 When the federal government bought the island in 2003, it joined the Stewart B. McKinney National Wildlife Refuge, a collection of federally owned islands along 70 miles (110 km) of Connecticut coastline from Greenwich to Westbrook.

The Calf Island Community Trust, Inc., opposed the transfer of the island from the Greenwich Family YMCA to the federal government, in part because a permit would be required for some activities on the island; nevertheless, the purchase was made.

Calf Island Conservation, Inc., a volunteer group, helps maintain and improve the island. The group spent $65,000 on the island in 2005 and 2006. Upgrades of bathrooms, buildings, trails and docking facilities are planned.

All content from Kiddle encyclopedia articles (including the article images and facts) can be freely used under Attribution-ShareAlike license, unless stated otherwise. Cite this article:
Calf Island (Connecticut) Facts for Kids. Kiddle Encyclopedia.