The Calhoun Street Toll Supported Bridge (also known as the Trenton City Bridge) is a historic bridge connecting Calhoun Street in Trenton, New Jersey across the Delaware River to East Trenton Avenue in Morrisville, Bucks County, Pennsylvania, United States. It was constructed by the Phoenix Bridge Company of Phoenixville, Pennsylvania, in 1884. The bridge was part of the Lincoln Highway until 1920 (when the highway was moved to the free Lower Trenton Bridge), and was later connected to Brunswick Circle by the Calhoun Street Extension as part of a bypass of downtown Trenton. Prior to 1940, trolleys of the Trenton-Princeton Traction Company, utilized this bridge to cross into Pennsylvania. The bridge is owned by the Delaware River Joint Toll Bridge Commission, and is maintained with tolls from other bridges.

On May 24, 2010, the bridge completely closed to vehicular and pedestrian traffic to undergo much-needed renovations including truss repair and repainting, deck replacement, and repair of approaches. The rehabilitation project was completed October 8, 2010, and the bridge was rededicated in a ceremony on October 12. 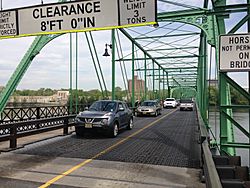 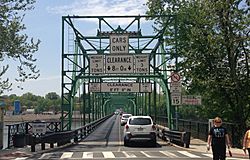 Eastern end of the bridge

All content from Kiddle encyclopedia articles (including the article images and facts) can be freely used under Attribution-ShareAlike license, unless stated otherwise. Cite this article:
Calhoun Street Bridge Facts for Kids. Kiddle Encyclopedia.