The California whipsnake (Masticophis lateralis) also known as the striped racer, is a colubrid snake found in habitats of the coast, desert, and foothills of California.

Masticophis lateralis is 90–120 centimetres (3.0–3.9 ft) in total length (including tail). It is slender, with a yellowish stripe along each side, set against a dark brown or black back.

The California whipsnake is known to eat a variety of live animals including insects, lizards, snakes, birds, and small mammals. It shows a strong preference for lizards, which are captured by a grasp of the mouth, and swallowed alive.

Masticophis lateralis is fast-moving, diurnal, and an active forager. It commonly moves over and through brush and trees to avoid predation and to capture prey. The California whipsnake has been observed moving into the top of scrub plants after emerging from nightly retreats to gain access to direct sunlight before the sunlight reaches ground level. It is not venomous, but likely to strike if captured.

As with many species and subspecies, taxonomic reclassification is an ongoing process, and differing sources often disagree. The genus Masticophis may soon be absorbed by the closely related genus Coluber, which contains the racer (Coluber constrictor).

The Alameda whipsnake subspecies is endemic to California. The subspecies is considered threatened there. Its range is relatively small, and much of the subspecies' habitat is threatened by development. It was first collected by Archie Mossman and later described by Riemer in 1954. The Alameda Whipsnake is a threatened species of colubrid snake distinguishable by its broad head, large eyes, black and orange coloring with a yellow stripe down each side, and a slender neck. The Alameda Whipsnake is a wary creature known for its speed and climbing abilities utilized when escaping predators or hunting prey. 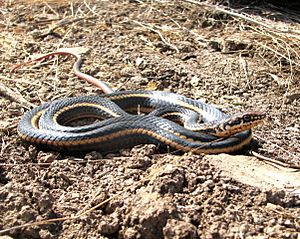 Nota bene: A trinomial authority in parentheses indicates that the subspecies was originally described in a genus other than Masticophis.

The geographic range of the Alameda whipsnake subspecies is contiguous in the area of southern Alameda County, northern Santa Clara County, and western San Joaquin County, in the southeastern Bay Area of Northern California. It has commonly been reported as having a more specific association with chaparral and scrub plant communities as the habitat where it is most commonly found.

The geographic range of the chaparral whipsnake subspecies has been reported to include woodlands, grasslands, chaparral scrublands, and riparian habitats.

All content from Kiddle encyclopedia articles (including the article images and facts) can be freely used under Attribution-ShareAlike license, unless stated otherwise. Cite this article:
California whipsnake Facts for Kids. Kiddle Encyclopedia.