Callensburg is a borough in Clarion County, Pennsylvania, United States. The population was 207 at the 2010 census.

Pennsylvania Route 368 passes through the center of Callensburg, leading west 7 miles (11 km) to Parker on the Allegheny River. Just east of Callensburg, PA 368 ends at Pennsylvania Route 58, which leads east 3 miles (5 km) to Sligo and northwest 7 miles (11 km) to St. Petersburg, which is 2 miles (3 km) south of Interstate 80.

According to the United States Census Bureau, Callensburg has a total area of 0.2 square miles (0.4 km2), all of it land.

Callensburg was surveyed in 1826, by Hugh Callen, Sr., who commissioned a young surveyor named Sidle Lobaugh to lay out a town on part of the 300 acres he had purchased in 1812. Callen anticipated the building of the Pennsylvania Canal through that region, and while the eventual route of the canal did not pass near Callensburg, the area still attracted enough settlers to form a borough. It was incorporated in 1851, and held the first town election on March 21, 1851.

In laying out the town, Mr. Callen reserved three acres for building a Presbyterian Church and cemetery, and deeded an open lot north of Main street, where the town spring was located, to the town. He built his house south of Licking Township, where local legend claimed there was a large poplar tree:

"This tree grew from a twig used by Mr. Callen as a riding whip. On his return from church at Concord one Sunday he stuck the whip into the ground, and this lone poplar stands today as a monument to the piety of him who planted it."

There were 96 households, out of which 26.0% had children under the age of 18 living with them, 46.9% were married couples living together, 7.3% had a female householder with no husband present, and 43.8% were non-families. 34.4% of all households were made up of individuals, and 17.7% had someone living alone who was 65 years of age or older. The average household size was 2.33 and the average family size was 3.20. 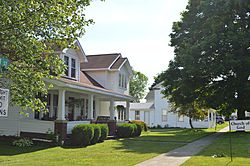 All content from Kiddle encyclopedia articles (including the article images and facts) can be freely used under Attribution-ShareAlike license, unless stated otherwise. Cite this article:
Callensburg, Pennsylvania Facts for Kids. Kiddle Encyclopedia.