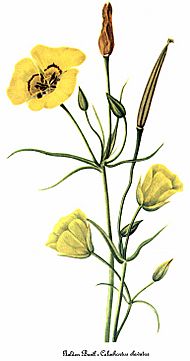 Calochortus clavatus is a species of mariposa lily known by the common name clubhair mariposa lily. It is endemic to California where it is found in forests and on chaparral slopes.

The Calochortus clavatus lily produces tall stems up to 1 metre (3.3 ft) in height and only basal leaves.

Atop the stem is a lily bloom with sepals up to 4 centimeters long. The petals are up to 5 centimeters long and yellow with a darker line or series of bands near the base, which are often red. The cup of the flower is filled with hairs which have clubbed ends. The anthers are often deep purple.

The capsule fruit is up to 9 centimeters long. 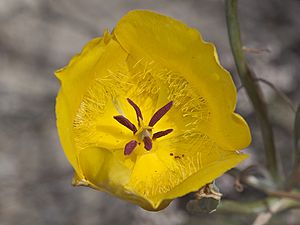 Varieties of Calochortus clavatus include:

All content from Kiddle encyclopedia articles (including the article images and facts) can be freely used under Attribution-ShareAlike license, unless stated otherwise. Cite this article:
Calochortus clavatus Facts for Kids. Kiddle Encyclopedia.