José Monje Cruz (5 December 1950 – 2 July 1992), better known by his stage name Camarón de la Isla (Spanish: Shrimp of the Island), was a Spanish Romani flamenco singer. Considered one of the all-time greatest flamenco singers, he was noted for his collaborations with Paco de Lucía and Tomatito, and the three of them were of major importance to the revival of flamenco in the second half of the 20th century.

He was born in San Fernando, Cádiz, Spain, into a Spanish Romani family, the seventh of eight children. His mother was Juana Cruz Castro, a "Canastera", literally a basket weaver, and meaning from a wandering roma family, and whose gift of singing was a strong early influence.

His father, Juan Luis Monje, was also a singer as well as a blacksmith, and had a forge where Camarón worked as a boy. His uncle José nicknamed him Camarón (Spanish for "Shrimp") because he was blonde and fair skinned.

When his father died of asthma, while still very young, the family went through financial hardship. At the age of eight he began to sing at inns and bus stops with Rancapino to earn money. At sixteen, he won first prize at the Festival del Cante Jondo in Mairena de Alcor. Camarón then went to Madrid with Miguel de los Reyes and in 1968 became a resident artist at the Tablao Torres Bermejas where he remained for twelve years.

During his time at Tablao Torres Bermejas, he met Paco de Lucía, with whom he recorded nine albums between 1969 and 1977. The two toured extensively together during this period. As Paco de Lucía became more occupied with solo concert commitments, Camarón worked with the flamenco guitarist Tomatito.

In 1976, at the age of 25, Camarón married Dolores Montoya, a Romani girl from La Línea de la Concepción whom he nicknamed "La Chispa" (The Spark). At the time La Chispa was 16. The couple had four children. 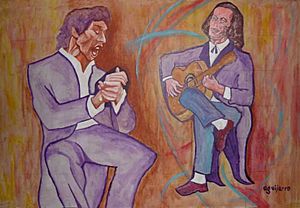 Many consider Camarón to be the single most popular and influential flamenco cantaor (singer) of the modern period. Although his work was criticized by some traditionalists, he was one of the first to feature an electric bass in his songs. This was a turning point in the history of Flamenco music that helped distinguish Nuevo Flamenco.

In later years, his health deteriorated.

In 1992, Cruz died of lung cancer in Badalona, Spain. He was buried in a Catholic ceremony at the cemetery of San Fernando as he wanted. It was estimated that 100,000 people attended his funeral.

On 5 December 2000 the Ministry of Culture of the Junta de Andalucía posthumously awarded to Camarón the 'Llave de Oro del Cante', the Golden Key of Flamenco. This was only the fourth key awarded since 1862.

In 2006, Isaki Lacuesta directed La Leyenda del Tiempo (The Legend of Time), in which a Japanese woman visits Camarón's birthplace to learn to sing exactly like him.

In 2018, the documentary film Camarón: Flamenco y Revolución (Camarón: The Film), from the Spanish director Alexis Morante, was released through Netflix. In an interview, the director would say that one of his goals with the film was "to explain how the myth was built". 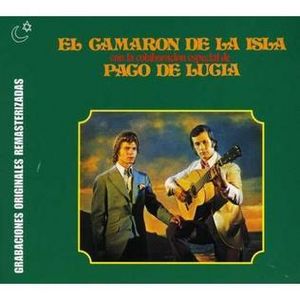 with Paco de Lucía (Their first albums were nameless, but were known among aficionados by the name of the first track)

with Paco de Lucía and Tomatito

The titles given for the first five albums with Paco de Lucía are those in popular usage, being the titles of the first tracks. Formally, all of them are entitled El Camarón de la Isla con la colaboración especial de Paco de Lucía with the exception of Canastera.

All content from Kiddle encyclopedia articles (including the article images and facts) can be freely used under Attribution-ShareAlike license, unless stated otherwise. Cite this article:
Camarón de la Isla Facts for Kids. Kiddle Encyclopedia.