The Campo de Cahuenga, near the historic Cahuenga Pass in present-day Studio City, California, was an adobe ranch house on the Rancho Cahuenga where the Treaty of Cahuenga was signed between Lieutenant Colonel John C. Frémont and General Andrés Pico in 1847, ending hostilities in California between Mexico and the United States. The subsequent Treaty of Guadalupe Hidalgo of 1848, ceding California, parts of Colorado, Nevada, New Mexico, and Arizona (but not Texas since it had seceded from Mexico in 1836, declared itself a republic, and joined the union in 1845) to the United States, formally ended the Mexican–American War. From 1858 to 1861 the Campo de Cahuenga became a Butterfield Stage Station.

Tinted postcard of the original adobe ranch house, with Cahuenga Peak in the background. 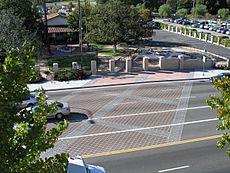 Decorative pavement marks the location of the original adobe structure, which faced toward the upper left. 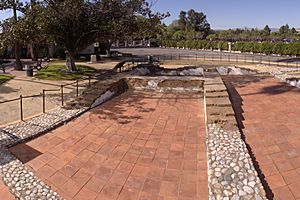 The foundation of the original adobe at Campo de Cahuenga.

The original adobe structure was demolished in 1900. The city of Los Angeles provided funds for the purchase of the property in 1923, and a Mission Revival and Spanish Colonial Revival style replica "adobe" ranch house was built by the city following an effort led by Irene T. Lindsay, then President of the San Fernando Valley Historical Society, and dedicated on November 2, 1950. It is now a park and interpretive center managed by the City of Los Angeles's Department of Recreation and Parks in partnership with the Campo de Cahuenga Historical Memorial Association. Campo de Cahuenga is registered on the National Register of Historic Places, as California Historical Landmark No. 151, and as Los Angeles Historic-Cultural Monument No. 29.

The foundations of the original adobe were unearthed beneath Lankershim Boulevard during construction of the Metro B Line subway. The parts of the foundations within the park are preserved as an exhibit, and the "footprint" of the foundations under the street and sidewalk is marked by decorative pavement.

Campo de Cahuenga is often confused with the nearby Rancho Cahuenga, an inholding within the Rancho Providencia land grant, now part of Burbank.

The building is used by various organizations for special programs and regular meetings, and it is open with a docent on the first Saturday of each month, from 12:00 PM to 4:00 PM.

California Historical Landmark Marker No. 151 at the site reads:

All content from Kiddle encyclopedia articles (including the article images and facts) can be freely used under Attribution-ShareAlike license, unless stated otherwise. Cite this article:
Campo de Cahuenga Facts for Kids. Kiddle Encyclopedia.