This is a list of Los Angeles Historic-Cultural Monuments in the San Fernando Valley, California. It includes Historic-Cultural Monuments in the San Fernando Valley as well as the adjacent Crescenta Valley. In total, there are more than 70 Historic-Cultural Monuments (HCM) in the San Fernando and Crescenta Valleys. A handful of additional historic sites in the valleys have been designated as California Historical Landmarks or listed on the National Register of Historic Places. The sites that are within City of Los Angeles borders are covered by two commissions of the Los Angeles Department of City Planning: the North Valley Area Planning Commission and the South Valley Area Planning Commission. They are designated by the City's Cultural Heritage Commission.

Overview of the Valley's Historic-Cultural Monuments 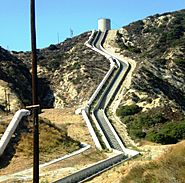 The Historic-Cultural Monuments in the San Fernando Valley are spread across the Valley from Chatsworth in the northwest to Studio City in the southeast, and from the City of Calabasas in the southwest to Tujunga and La Crescenta in the northeast.

When the Los Angeles Cultural Heritage Board was formed in 1962, its first-designated sites were HCM #1 (Leonis Adobe) and HCM #2 (Bolton Hall), both located in the San Fernando/Crescenta Valleys.

The oldest building in the Valley is the Convento Building at the Mission San Fernando Rey de España, which was built between 1808 and 1822. Other monuments directly related to the Mission San Fernando include the kiln in Chatsworth used to make bricks and tiles for the mission, the wells and settling basin in Sylmar used to supply water to the mission, and the Pioneer Cemetery where Mission Indians as well as Valley pioneers are buried.

Eleven of the monuments located in the Valley have also been listed on the National Register of Historic Places. They are: Leonis Adobe, Bolton Hall, Rómulo Pico Adobe, the Convento Building at the Mission San Fernando, Campo de Cahuenga, Minnie Hill Palmer House, Los Encinos State Historic Park, Portal of the Folded Wings Shrine to Aviation, the Old Stage Coach Trail through the Santa Susana Mountains, and the North Hollywood and Van Nuys branch libraries.

Churches and other places of worship are well represented on the list, including the Chatsworth Community Church (1903), Faith Bible Church in Northridge (1917), the Saint Saviour's Chapel at Harvard-Westlake School in Studio City, and the David Familian Chapel of Temple Adat Ari El at the Valley's first Jewish synagogue in North Hollywood.

The role of trees in the development of the Valley is celebrated with monument listings for a 1,000-year-old oak tree in Encino (removed in 1996), 114 Himalayan Deodar trees along White Oak in Granada Hills, 76 mature olive trees along Lassen Street in Chatsworth, and 300 pepper trees lining in Canoga Avenue in Woodland Hills.

All content from Kiddle encyclopedia articles (including the article images and facts) can be freely used under Attribution-ShareAlike license, unless stated otherwise. Cite this article:
List of Los Angeles Historic-Cultural Monuments in the San Fernando Valley Facts for Kids. Kiddle Encyclopedia.