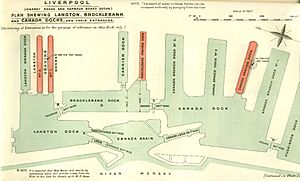 Canada Dock is a dock on the River Mersey, England, and part of the Port of Liverpool. It is situated in the northern dock system in Kirkdale. Canada Dock consists of a main basin nearest the river wall with three branch docks and a graving dock to the east. It is connected to Brocklebank Dock to the north and Huskisson Dock to the south.

The dock was the last and biggest designed by Jesse Hartley, opening in 1859. In 1862, the Canada half-tide basin, which became Brocklebank Dock, was added by George Fosbery Lyster. Canada Dock dealt in timber being named after the main source of the trade, Canada. Fire was the greatest concern and the dock was initially kept isolated from the rest of the dock system for safety reasons. However, a fire did break out in 1893 which caused £50,000 of damage. The original river entrance also presented navigational difficulties, with the area affected by silting. Modifications to the basin took place in the late nineteenth and early twentieth centuries, creating the branch docks and graving dock.

During the First World War, the liner RMS Lusitania was refitted at Canada Dock, including the installation of twelve 6-inch guns.

The removal of the problematic tidal basin only took place after World War II, following a complete rebuild. Further improvements took place during the 1950s and 1960s as the dock became a base for cargo liner companies such as Harrison Line.

The dock was used as a ro-ro berth during the early 1990s.

The dock was connected to the national rail network by the Canada Dock Branch Line. The short branch line from Atlantic Junction, just west of Kirkdale railway station, into the dock was closed on 12 September 1982. The terminus was Canada Dock railway station. Although the branch line closed to passengers in 1941, it remained in use for goods. The Route Utilisation Strategy states that there should be no building on the short path of the old track in case it requires reinstating.

From 1893, passenger services were also provided by the Liverpool Overhead Railway via Canada Dock (LOR) station until 1956.

Canada Dock remains in use, handling general bulk cargoes and as a site for scrap metal processing and storage. 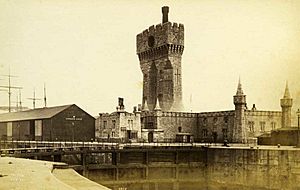 All content from Kiddle encyclopedia articles (including the article images and facts) can be freely used under Attribution-ShareAlike license, unless stated otherwise. Cite this article:
Canada Dock Facts for Kids. Kiddle Encyclopedia.