Kids Encyclopedia Facts
This page is about the square in London. For the office towers in Toronto, see Canada Square Complex. 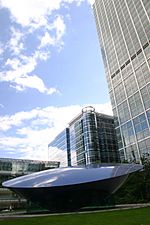 The complex is named for Canada by Olympia and York, the original developers of the site owned by the Paul Reichmann family of Toronto.

All content from Kiddle encyclopedia articles (including the article images and facts) can be freely used under Attribution-ShareAlike license, unless stated otherwise. Cite this article:
Canada Square Facts for Kids. Kiddle Encyclopedia.