Capitol View is an inner-city neighborhood 2.5 miles from downtown Atlanta, Georgia that was named for its excellent view of the Georgia State Capitol building. Its boundaries include Metropolitan Parkway to the east, Lee Street to the west, and the Beltline to the north. On the south, the border follows Arden Street, Deckner Avenue, and Perkerson Park. Its central location is only minutes away from Atlanta Downtown Atlanta, Midtown Atlanta, Buckhead, College Park, East Point, Hartsfield-Jackson Atlanta International Airport, and major highways and interstates such as the Downtown Connector/I-75/I-85, I-20, and Metropolitan Parkway.

Capitol View is filled with a housing stock of 1915-1925 of craftsman bungalows as well as earlier Queen Anne houses that precede the planned development of the neighborhood. Several of the Queen Annes on Metropolitan Avenue were built by the Deckner family, for whom Decker Avenue is named. Many of the historic homes are rapidly being renovated as the neighborhood continues to revitalize and attract new residents. 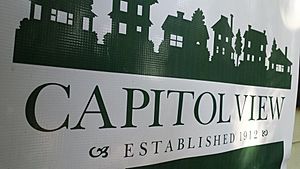 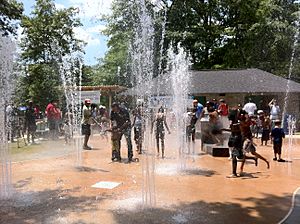 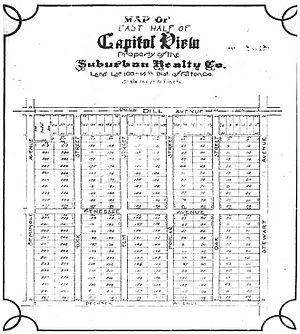 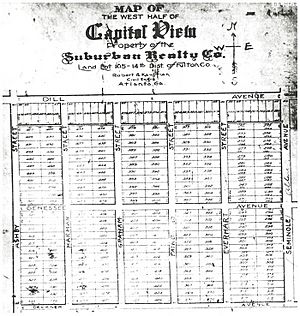 In the first and second decades of the 1900s, the residential area now known as Capitol View was little more than a farm and pasture owned primarily by A.P. Stewart, "Uncle John" Shannon and the Deckner family. There were no paved streets, no electric lights and no sewage system.

In 1858, the 12 charter members of Capitol View Baptist Church (then located on Beatie Avenue) went to church by lantern light. Between 1910 and 1914, the community began growing, largely due to the addition of a Masonic Temple and pharmacy to the area. By 1913, utilities were installed and Capitol View was annexed in the City of Atlanta.

The early 20th century trolley system revolutionized Capitol View and led to streets laid out in a grid pattern that has a longer north-south axis than east-west.

Commercial activity is concentrated along Dill Avenue, with a major commercial intersection at Dill and Metropolitan Parkway. This intersection has two prominent buildings, the 1921 Masonic Temple and the 1927 Capitol View United Baptist Church, as well as several smaller commercial buildings. 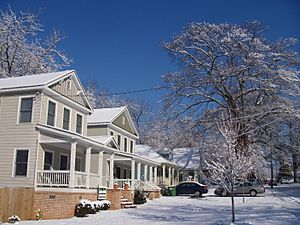 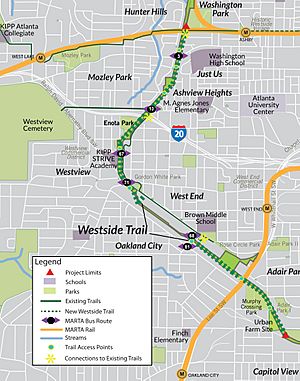 In the late 1990s, Stewart Avenue was renamed Metropolitan Parkway in an effort to shake the street's unfortunate reputation as a haven of crime. Since then Dill Ave restored the area have helped to increase property values and reduce crime. The approval of a Tax-allocation district for Metropolitan Parkway (although it does not include the Capitol View area) should help to revitalize a long-neglected business corridor. The redevelopment of the nearby Fort McPherson into a mixed use development/movie studio in the future will provide employment opportunities for existing and new residents. MARTA is also in the process of transitioning the Oakland City MARTA station into a transit-oriented development by converting existing parking lots into condos, apartments, and storefronts.

With the 2014 construction of the Beltline, the rising trend toward city living, and the new Metropolitan Branch library, Capitol View appears to be on a track for revitalization like many other in-town Atlanta neighborhoods.

The Atlanta BeltLine runs through the northern part of the Capitol View neighborhood, dropping south from Adair Park and crossing Metropolitan Avenue just north of Erin Avenue (in fact, that’s the BeltLine bridge that you drive under on Metropolitan). From there, the BeltLine heads into neighboring Capitol View Manor.

In September 2013, the City of Atlanta was awarded an $18 million TIGER V grant from the U.S. Department of Transportation to develop the southwest corridor of the Atlanta BeltLine. In the second half of 2014, construction will commence on the 3-mile Westside Trail. The 3-mile Westside trail will run along the northern edge of Capitol View from University Avenue in Adair Park north to Lena Avenue at Washington Park in West End. For a half mile along White Street, the trail will use the existing West End Trail. The project funding includes 14 points of entry (11 of which will be ADA-accessible) with ramp and stair systems, greenway, and preservation for future transit. The construction is expected to start in the fall of 2014.

The Atlanta BeltLine Westside Trail groundbreaking took place on Wednesday, November 12 at 10:30 a.m. The Westside Trail, the next major milestone for the Atlanta BeltLine’s network of trails, transit, parks and green space will be a three-mile addition running from University Avenue in Adair Park to Lena Street at Washington Park.The design of the Westside Trail project was led by Atlanta BeltLine, Inc. in partnership with the Georgia Department of Transportation and support from a design team led by Kimley-Horn and Associates. The initial phase of a project this complex normally takes two years to complete. Yet the process took only nine months with the help of a unique partnership between the City of Atlanta, the Georgia Department of Transportation, the USDOT Federal Highway Administration, Atlanta BeltLine, Inc. and its design team. Construction of this project is expected to take approximately 24 months.

When completed, the Westside Trail will have a 14-foot wide concrete multi-use trail in this historic railroad corridor. The project will also include the construction of 14 access points, 11 of which are ADA-accessible, along with lighting, security cameras, signage, way-finding, mile-markers, and underground infrastructure. An expansion of the Atlanta BeltLine arboretum will blend with hundreds of large, native trees and integrate more than 30 acres of inviting and usable new green space. The project will be constructed in preparation for future transit that is currently in the planning stages. The Westside Trail connects four schools and four parks, as well as the residents of 10 southwest Atlanta neighborhoods to public transit, existing community businesses and future economic development sites.

Capitol View Neighborhood Association (CVNA) exists to improve the quality of life for Capitol View residents and to preserve, restore, and rejuvenate the neighborhood.

Community involvement includes a monthly potluck, and a yearly kick ball competition in its park. 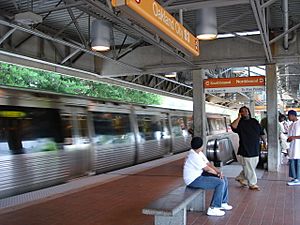 Capitol View is located directly on the Red/Gold Lines of the MARTA Train Rail with a neighborhood stop at the Oakland City Train Station. This allows easy public transit options to the Atlanta area and beyond. In addition, Marta Bus stops line the perimeter of the neighborhood and surrounding areas. 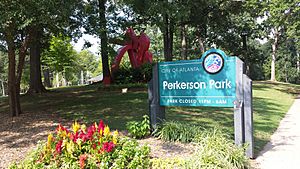 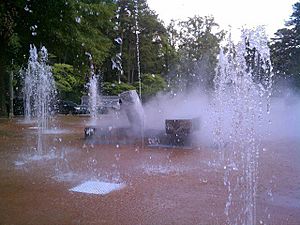 Capitol View is located between Perkerson Park and the proposed Atlanta Beltline park system. Perkerson is a 50-acre (200,000 m2) park with a large pavilion and several other picnic facilities. A new playground was recently installed during a renovation of the park's recreation center. In March 2010, the Friends of Perkerson Park, a community volunteer group, hosted the first "Spring Forward Festival" which raised money to make improvements to the park.

Perkerson Park is home to the only permanent disc golf course in the city of Atlanta.

Capitol View is also between two of the six targeted economic development areas on the Atlanta Beltline: Murphy's Crossing, directly north of Capitol View, and University/Metropolitan to the east.

All content from Kiddle encyclopedia articles (including the article images and facts) can be freely used under Attribution-ShareAlike license, unless stated otherwise. Cite this article:
Capitol View, Atlanta Facts for Kids. Kiddle Encyclopedia.