Captain Novolin is a 1992 educational platform video game, developed by Sculptured Software and published by Raya Systems for the Super Nintendo Entertainment System. Starring the eponymous superhero with type 1 diabetes, the game sees the player control Captain Novolin on a quest to save the mayor of Pineville from the supervillain Blubberman. It is a part of educational video game series from Raya that also includes Rex Ronan: Experimental Surgeon, Packy and Marlon, and Bronkie the Bronchiasaurus.

Funding for the game came from Novo Nordisk (makers of the Novolin brand of insulin) and the National Institutes of Health. To promote the game, Novo Nordisk distributed 10,000 free copies to hospitals. During its initial release, the game was positively received by diabetes specialists, as well as children with the condition; but the retrospective reception from video game critics has been poor, and it has been named as one of the worst video games of all time. 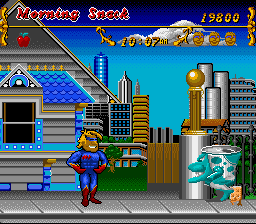 Captain Novolin is a 2D side-scroller. The plot of Captain Novolin has the titular hero setting out to save Pineville's diabetic Mayor Gooden from aliens and their leader Blubberman, as the mayor only has enough insulin for 48 hours.

Before the game starts, a doctor and dietitian give advice on how to manage one's diet and insulin. Throughout the game, Captain Novolin has to avoid the alien invaders, who have the appearance of junk food items, such as "Cereal Killer" and "Larry Licorice". Meanwhile, Captain Novolin must eat healthy meals to keep his blood glucose within a safe zone. Captain Novolin can die if his blood glucose level goes too high or low. Players can earn points by keeping Novolin's glucose level in the save zone and defeating the enemy aliens, while receiving bonus points by correctly answering questions that relate to diabetes. In addition, the game has a feature whereby a diabetic player can specify the frequency of their real-life insulin injections.

Captain Novolin was warmly received among children with diabetes and their parents. In one study, 23 diabetic children (10 boys and 13 girls in the age range of 6 to 16 years) and the parent of one child were interviewed individually. The children were enthusiastic about the game, with several saying that it would be useful when telling their friends about diabetes. A separate evaluation involved a number of diabetic children aged from 8 to 14, along with their respective parents. Participants said that the game could help parents and children to talk about diabetes, as well as helping children talk to their friends about the subject. Former Cheers cast member John Ratzenberger, a celebrity volunteer for the Juvenile Diabetes Foundation, thought the game was fun, feeling that it taught children how to manage their diabetes.

All content from Kiddle encyclopedia articles (including the article images and facts) can be freely used under Attribution-ShareAlike license, unless stated otherwise. Cite this article:
Captain Novolin Facts for Kids. Kiddle Encyclopedia.