The game's narrative involves master thief Carmen Sandiego, who has used a time machine called the Chronoskimmer to plant her associates at key historical events to stop them from occurring. The object of the game is to track down Carmen Sandiego and her henchmen by jumping through time tunnels that link historical periods together, retrieve the stolen item, and correct the course of history. During each case, the player visits a well-known historical event, such as the signing of the Declaration of Independence or Lewis and Clark's expedition to the Pacific Northwest, and meets historical figures like Queen Hatshepsut, William the Conqueror, and Yuri Gagarin. At the end of case 18, the player locates the Chronoskimmer, thereby acquiring the tools to chase and capture Carmen for the final case.

Carmen Sandiego's Great Chase Through Time received critical acclaim upon its release, earning praise for its story, soundtrack, puzzle-solving and historical content. It was awarded Computer Edutainment Game of the Year at the 1998 D.I.C.E. Awards.

On the opening screen, the player can choose to sign into the ACME roster to begin a game, continue with a saved one, or create a customized game by selecting one or more cases (a feature recommended for teachers). The game is a point-and-click adventure with a changeable cursor, drop down menus and on-screen icons. Players must identify on-screen "hot spots" to find items that will help their progress. In each case, the player must investigate clues to help a historical figure solve a problem, recover a stolen treasure, and capture a thief. The Good Guides are available to help the player to complete each challenge. The player also has access to the ACME Agent Handbook supplied with the game, which contains hints and suggestions for solving the puzzles. Each case involves a four-step process of identifying the theft, solving the problem, collecting the Carmen notes and arresting the thief.

The game is divided into 19 cases, starting in Ancient Egypt and advancing towards the modern day. The player must complete all cases to win the game. Before starting a case, the Chief will tell the player the nature of the problem in the period of history. At the start of each case, the player will be assisted by one of five accompanying Good Guides (Ann Tickwittee, Ivan Idea, Rock Solid, Renee Santz, and Polly Tix), characters who are knowledgeable about the culture of each case's historical period and who have a particular area of historical expertise, such as antiquities, exploration or inventions. They provide some historical context and mention any notable figures who will appear throughout the case. They also help the player by liaising with the historical figures on the player's behalf. After clicking on a person, the player can proceed to question them about their situation. If necessary, they may then re-ask any questions via rollover text to extract further information. Historical characters' responses guide the player toward that period's task.

The player begins the game with the rank of Time Pilot but is promoted by the Chief as the game progresses, advancing to Time Scout, Time Trooper, Time Detective, Time Inspector, and, by the end of the game, achieving the rank of Time Sleuth, enabling a chance to capture Carmen Sandiego.

Items must be collected and moved around the screen or placed in the inventory box to complete cases. Characters will either offer the player objects, or the player must seek out items that can be taken. Collectible items can be kept for later use by dragging the object into the Inventory box. Players must also look for scraps of the Carmen Notes, which describe where each thief will hide. These notes have each been torn into three pieces to make them more difficult to find. The player must click on the scraps of paper to assemble them into a whole note. Once all the pieces of the Carmen note are found, the ACME handcuffs (known as Time Cuffs) activate and the player can decode Carmen's message to deduce her henchmen's location. Using the Time Cuffs on the relevant object reveals the thief, whom the Good Guide then arrests. After capturing each crook (with Dee Cryption captured once and the others captured twice), the player pursues Carmen herself.

The gameplay mechanics change once the player retrieves the Chronoskimmer at the end of Case 18, which sees Carmen relinquishing her stolen item to the player. Instead of staying within the same time period for the duration of the final case, the player now follows clues at each location to work out where to go next. This is a return to the Where in Time Is Carmen Sandiego? mechanic. Though the player now has the ability to travel to any period in history whenever they like, Carmen may only travel to time periods that she has already visited, and therefore the game restricts the player to the time periods of the previous cases. Parts of the screen previously occupied by Carmen's notes and in-game collectible items are replaced with the Chronoskimmer slider and the travel button. Throughout this case, the player receives help from all five ACME Good Guides. Originally, players could visit a themed website for "more in-depth learning" about the cultures visited in the game, which included "articles from Brittanica [sic], hints, and a feedback area." The site also had a Christopher Columbus minigame, which was linked to the finished game's tenth case. Additionally, it offered an extended free trial exclusively to owners of the game. The site—along with the other Carmen Sandiego pages created by Broderbund Software and maintained by The Learning Company—was shut down in 2005. 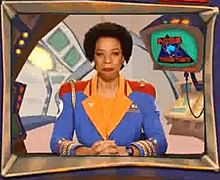 Lynne Thigpen as The Chief

The game begins in the present day, when Carmen Sandiego breaks into ACME Timenet headquarters in San Francisco and steals a time travel device called the ACME Chronoskimmer. Carmen sends her V.I.L.E. villains to travel through time and steal historical treasures, thereby altering the course of history. She also provides them with a note detailing where to hide before she picks them up.

After the theft, the Chief greets the player and explains the importance of recovering the device and restoring history, as well as the Chronoskimmer's safeguard mechanic of leaving time tunnels behind. The Chief sends the player on a series of missions to stop Carmen and her crooks. After the ninth case is solved and all the crooks are incarcerated, Carmen Sandiego uses the Chronoskimmer to bail them out and commit more thefts in history. After reinforcing the prison, the Chief sends the player to recapture the crooks and catch Carmen once and for all. After the player finishes recapturing the crooks and restoring history, Carmen Sandiego lets the player retrieve the Chronoskimmer then goes through time, until she returns to the present to steal her personal dossier from ACME HQ. After a chase by all five Good Guides, Carmen Sandeigo is caught and incarcerated.

Once the player is successful, the Chief lets them in on top secret information: Carmen Sandiego was once an ACME agent but felt the challenge of catching crooks was too easy so she became a villain to outsmart her former colleagues. She aimed to delete a detailed dossier about her transition, which is thematically linked to her desire to delete the memory of history's greatest figures and achievements (dubbed "Project: History Sweep"), under the pretense of simply "stealing history's greatest treasures." Though unstated in the game, it is implied that Carmen Sandiego only ordered her henchmen to steal these items as a decoy to ensure the ACME headquarters was completely empty while all agents were cleaning up her trail of historical messes.

The only live-action role in the game was that of The Chief, played by Lynne Thigpen. All other roles were performed as voice-overs. Brenda Burke, who played Carmen Sandiego on the game show's second season, voiced the character in the game. Although most of the voice actors in the game only play one character, some performed multiple roles in different cases. For example, Charles Martinet plays both William Shakespeare and Ludwig van Beethoven. Jarion Monroe plays a mixture of both historical and fictional characters: Ivor the Blacksmith, Kublai Khan, Huang the Merchant, Richard Burbage, and Yuri Gagarin. While the voice actors playing most of the crooks are not credited, Francine Scott is credited as playing "Villains."

The game distinguishes between historical and fictional characters with rollover text that is displayed when the cursor is placed over a character. With a few exceptions (including ACME agents, V.I.L.E. villains, and the peasants in Case 5), characters who have both first and last names are genuine historical figures, while characters with only a first name or a descriptive title are fictional. However, some of the real historical figures like Queen Elizabeth I and Montezuma are referred to by only their first names.

All content from Kiddle encyclopedia articles (including the article images and facts) can be freely used under Attribution-ShareAlike license, unless stated otherwise. Cite this article:
Carmen Sandiego's Great Chase Through Time Facts for Kids. Kiddle Encyclopedia.