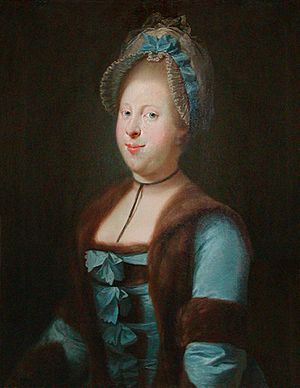 She was born in July of 1751.She was the last child of her father Frederick, Prince of Wales and Augusta. She married Christian VII of Denmark on 8 November 1766 at Christiansborg Castle. She did not know the groom was mentally ill. But the marriage did produce two children. The youngest daughter was thought to be the offspring of the king's doctor and the queen. Nothing was ever proven but the physician was killed and Caroline sent away. She died in May of 1775 at the age of 23.

All content from Kiddle encyclopedia articles (including the article images and facts) can be freely used under Attribution-ShareAlike license, unless stated otherwise. Cite this article:
Caroline Matilda of Wales Facts for Kids. Kiddle Encyclopedia.