Kids Encyclopedia Facts
This page is about the castle. For the village, see Carrick Castle (village). For the district electoral area in Northern Ireland, see Mid and East Antrim Borough Council.

Carrick Castle is a 14th-century tower house on the west shore of Loch Goil on the Cowal peninsula in Argyll and Bute, Scotland. It is located between Cuilmuich and Carrick, 4 miles (6.4 km) south of Lochgoilhead.

The castle stands on a rocky peninsula, and was formerly defended to landward by a ditch and drawbridge. The building is around 66 by 38 feet (20 by 12 m), and up to 64 feet (20 m) high with walls seven feet thick. It consists of two floors above the central great hall and stands 64 feet high. There is a curiosity – a small chimney is built into a window recess. There is an appendage of a smaller 17th Century structure to the original rectangular tower house. The structure has been designated a scheduled monument and a Category A listed building by Historic Environment Scotland.

The castle was probably built by the Campbells in the last decades of the fourteenth century, at a point of time when the family was dominant in the area.

It was used as a hunting lodge by James IV. Mary, Queen of Scots visited in 1563. 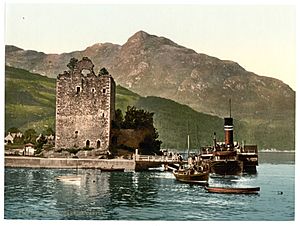 The ruin of Carrick Castle around 1890, with pier attracting tourism 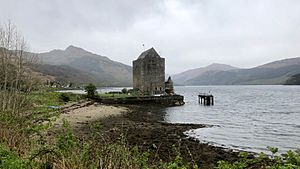 Carrick Castle in 2019, under restoration and re-roofed.

During Argyll's Rising in 1685, when Archibald Campbell, 9th Earl of Argyll, attempted to overthrow King James VII, captain Thomas Hamilton of HMS Kingfisher reported that the castle had been burnt and walls reduced sufficiently to make it useless to the Campbell forces. Legend has it that the ship bombarded the castle, badly damaging the keep, which lost its roof.

The castle was intermittently occupied until it was sold to the Murrays, the Earls of Dunmore.

The keep was a ruin for many years but is now in private ownership and undergoing restoration.

All content from Kiddle encyclopedia articles (including the article images and facts) can be freely used under Attribution-ShareAlike license, unless stated otherwise. Cite this article:
Carrick Castle Facts for Kids. Kiddle Encyclopedia.