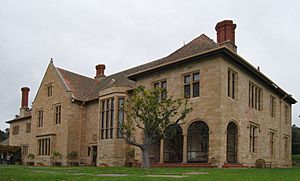 Carrick House, the main building on the Carrick Hill property

Carrick Hill is a publicly accessible historic property at the foot of the Adelaide Hills, in the suburb of Springfield, in South Australia. It was the Adelaide home of Sir Edward "Bill" Hayward and his wife Ursula (née Barr-Smith), and contains a large collection of drawings, sculptures, antiques and paintings. Completed in 1939 and built in the style of an English manor, it is one of the few period homes in Australia to have survived with its grounds undiminished and most of its original contents intact.

After being bequeathed to the state of South Australia upon Sir Edward's death in 1983, since 1985 it has been managed by the board of the Carrick Hill Trust, a statutory corporation which as of 2019[update] reports to the Department of the Premier and Cabinet.

The nearly 40-hectare property was the wedding gift of Ursula's father to the Haywards. After their marriage in 1935 the couple spent a year-long honeymoon in Europe. They bought many of the furnishings for their new home, including an imposing staircase, at the sale of Beaudesert House in Staffordshire, England. Construction of Carrick House began in 1937 and was completed in 1939. During this time Lady Hayward designed the gardens.

The Haywards claimed a number of well-known artists as close friends, and some of their work features in the collection that fills the house. Ursula was an artist in her own right, and her work is also represented.

The house and grounds are open to the public for most of the year, closing in July for maintenance. An admission charge applies to the house, but not the gardens. Carrick Hill regularly houses themed art exhibitions.

On 13 November 2005, it hosted a reunion picnic for former staff of John Martin's, which was for many years owned by the Hayward family. The event coincided with the opening of a social history exhibition entitled "Johnnies Spirit of a State" and was held on the weekend of the Adelaide Christmas Pageant, which was founded by Sir Edward.

In 2018, Carrick Hill hosted an exhibition of May Gibbs' illustrations and other artists working with Australian botanical subjects.

The Carrick Hill Trust has set up the Australian Museum of Gardening in the historic building which displays the influences over the art of gardening in the past 250 years. The collection includes more than thousand gardening tools.

All content from Kiddle encyclopedia articles (including the article images and facts) can be freely used under Attribution-ShareAlike license, unless stated otherwise. Cite this article:
Carrick Hill Facts for Kids. Kiddle Encyclopedia.