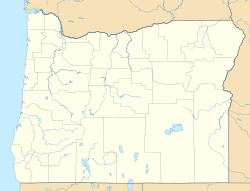 The Cascades Raptor Center is a nature center and wildlife hospital in Eugene, Oregon that specializes in raptor rehabilitation. As of November 2020, permanent inhabitants of the center include 37 individual birds from 21 species. 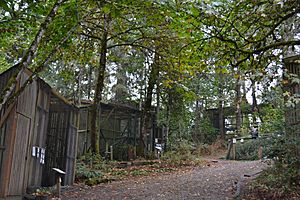 The Cascades Raptor Center was founded in 1987 as a 501c3 non-profit nature center and wildlife hospital, initially taking birds to schools and public events, but not allowing visitors. In early 1994 the center was moved to its current location, and it is now open to the public. The center specializes in rescuing, rehabilitating, and releasing sick, injured and orphaned birds back to the wild when possible, and providing a long term habitat for some that cannot be released into the wild because of their injuries or imprinting on humans.

The center provides guided educational programs of various lengths for large or small groups ("take a Walk on the Wild Side", "Reading with Raptors", and staff guided private tours) and self-guided tours at the facility, and visits by staff and birds to classrooms and other venues for presentations of various lengths ("Bring the Wild Alive" and "Reading with Raptors"). All guided programs can be tailored to the needs of the group.

All content from Kiddle encyclopedia articles (including the article images and facts) can be freely used under Attribution-ShareAlike license, unless stated otherwise. Cite this article:
Cascades Raptor Center Facts for Kids. Kiddle Encyclopedia.